Comparative Vandalism
Asger Jorn and the Artistic Attitude to Life 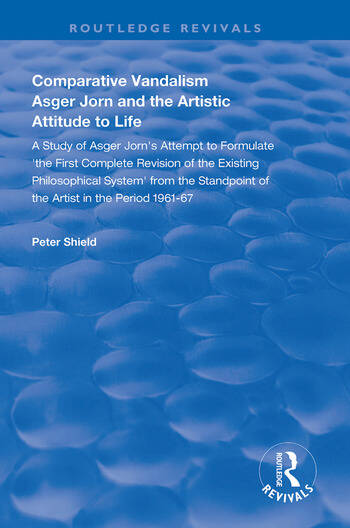 Comparative Vandalism: Asger Jorn and the Artistic Attitude to Life

First published in 1998, this volume is a study of Asger Jorn’s attempt to formulate the ‘first complete revision of the existing philosophical system’ from the standpoint of the artist in the period 1961-67.

The Danish artist Asger Jorn (1914-73), painter, draughtsman, potter and sculptor, was one of the most prominent figures of his generation in Europe. His characteristic paintings were spontaneous, using energetic brushstrokes, splashing and spotting with a wide-ranging palette. Jorn’s eclectic intellect absorbed an astonishing range of influences and involved him in many causes, including an ambitious programme to re-publish, with commentary, material vital to Scandinavian cultural history. He was also a founder member of Cobra (1948-51) and subsequently several other international groupings, which coalesced in 1957 in the setting-up of the Situationist International with French and Italian writers and artists.

Fascinated by the philosophical debate on the position of the artist in contemporary life and the artist’s relationship to the past, Jorn broke with the Situationist International in 1961 over the issue of whether an artist is an instigator of cultural change or only an instrument of political change. For the next four years, he committed himself to ‘a first complete revision of the existing philosophical system’ with the intention of placing the artist at the centre. Many of his ideas were first tried out in French in various Situationist publications and have since stirred considerable debate. His much more comprehensive texts in Danish of 1961-67 have never been made available in English.

In Comparative Vandalism, Peter Shield offers the first detailed study of Jorn’s revision of modern philosophy, exploring the origins and formulation of his ideas. The book includes colour and black and white reproductions chosen from his mature work to illustrate the connection between his writing and painting.

Part 1. The Trinary Order of Nature. 1. ‘The First Complete Revision of the Existing Philosophical System’. 2. The Archimedean Point. 3. ‘Work Demands an Instrument, a Tool’. Part 2. The Economics, Political Geography and Aesthetics of the Artistic Attitude to Life. 4. ‘The Unique and the Ordinary’. 5. The Creative Elite. 6. The Demand for Truth and the Demand for Justice. 7. ‘Situlogy is the Transformative Morphology of the Unique’. 8. ‘Art and Political Geometry’. 9. ‘True Aesthetics is a Rare Commodity’. Part 3. The Personal Strategies. 10. ‘The European Triumvirate of Fools’. 11. La Bête Humaine. 12. ‘He Also Makes New Who Smashes the Old’.