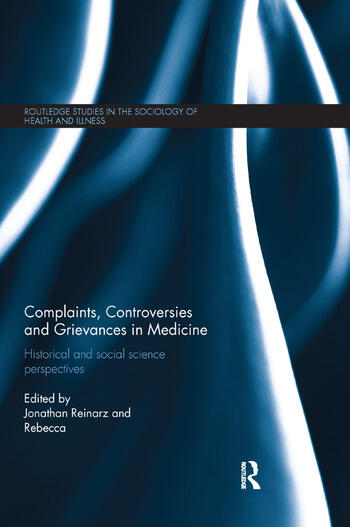 Recent studies into the experiences and failures of health care services, along with the rapid development of patient advocacy, consumerism and pressure groups have led historians and social scientists to engage with the issue of the medical complaint. As expressions of dissatisfaction, disquiet and failings in service provision, past complaining is a vital antidote to progressive histories of health care. This book explores what has happened historically when medicine generated complaints.

This multidisciplinary collection comprises contributions from leading international scholars and uses new research to develop a sophisticated understanding of the development of medicine and the role of complaints and complaining in this story. It addresses how each aspect of the medical complaint – between sciences, professions, practitioners and sectors; within politics, ethics and regulatory bodies; from interested parties and patients – has manifested in modern medicine, and how it has been defined, dealt with and resolved.

A critical and interdisciplinary humanities and social science perspective grounded in historical case studies of medicine and bioethics, this volume provides the first major and comprehensive historical, comparative and policy-based examination of the area. It will be of interest to historians, sociologists, legal specialists and ethicists interested in medicine, as well as those involved in healthcare policy, practice and management.

Introduction: Towards a History of Complaining About Medicine  Jonathan Reinarz and Rebecca Wynter  Part 1: Professionals  1. A Culture of Complaint: Psychiatry and its Critics  Andrew Scull  2. Complaining about Therapy Cultures  Hera Cook  3. "A Little Learning is a Dangerous Thing": Nineteenth-Century British Medical Missions and the Politics of Professionalisation, c. 1880-1910  Hilary Ingram  Part 2: Politics  4. Paying the Piper and Calling the Tune?: Complaints against Doctors in Workers’ Medical Schemes in the South Wales Coalfield  Steven Thompson  5. From Claims to Rights: Patient Complaints and the Evolution of a Mutual Aid Society  Pilar Leon-Sanz  6. "The Shape of the Iceberg": Doctors and Neglect Under the New Poor Law  Kim Price  Part 3: Patients  7. Complaining against Medical Practice and Practitioners: The Patient View, 1830s-1900  Steven King  8. Complaining in the Age of Consumption: Patients, Consumers or Citizens?  Alex Mold  9. Complaining about Typhoid in 1930s Britain  Rosemary Wall  Part 4: Public Relations  10. Sites of Complaint and Complaining: Fever and Smallpox Hospitals in late-Victorian London  Matthew Newsom Kerr  11. No Defence? Perceptions about Doctors Accused of Killing a Patient (1957-2009)  June Jones and Andrew Shanks  12. Looking Back to Bolitho and on to Bristol: Lessons from the 1990s  Jean McHale  Afterword: Going Public: The Act of Complaining  John Clarke

JONATHAN REINARZ is Professor of the History of Medicine at the University of Birmingham UK. His publications include Healthcare in Birmingham: The Birmingham Teaching Hospitals, 1779–1939(Woodbridge, 2009), and the edited collections A Medical History of Skin (with Kevin Siena; London, 2013), Medicine and the Workhouse (with Leonard Schwarz; Rochester, NY, 2013) and Permeable Walls: Institutional Visiting in Historical Perspective (with Graham Mooney; Amsterdam, 2009). He has also published on the history of the senses, including a special issue of the Journal for Eighteenth-Century Studies on ‘The Enlightenment and the Senses’ (edited with L. Schwarz, 2012) and Past Scents: Historical Perspectives on Smell (Champaign, IL, 2014), and edited a special issue of the journal Food and History (forthcoming 2014) on the history of hospital food, which inevitably touches on the subject of complaining.

REBECCA WYNTER is an Honorary Research Fellow in History and Visiting Lecturer in the History of Medicine Unit at the University of Birmingham UK. As Postdoctoral Researcher at Woodbrooke Quaker Study Centre, Birmingham, she is also co-curating a 2015 exhibition about Quakers in the Great War, to be mounted at Birmingham Museum and Art Gallery. Her current research centres on: material culture, lunatic asylums and workhouses; neurodisabilities and epileptic colonies; focal sepsis theory in British psychiatry; and the Friends’ Ambulance Unit, 1914-1919. Her publications include "Good in all respects’: appearance and dress at Staffordshire County Lunatic Asylum, 1818-54’, History of Psychiatry (March 2011), and "Horrible dens of deception’: an asylum and its discontents, c.1815-1860’, in T. Knowles and S. Trowbridge (eds), Insanity and the Lunatic Asylum in the Nineteenth Century (London, forthcoming 2015)