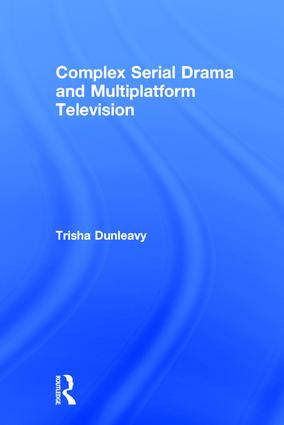 This book examines the creative strategies, narrative characteristics, industrial practices and stylistic tendencies of complex serial drama. Exemplified by shows like HBO’s The Sopranos, AMC’s Mad Men and Breaking Bad, Showtime’s Dexter, and Netflix’s Stranger Things, complex serials are distinguished by their conceptual originality, narrative complexity, transgressive lead characters and serial allure. As a drama form that continues to expand and diversify in today’s television, HBO’s Boardwalk Empire and Game of Thrones, Netflix’s Orange Is the New Black and Hulu’s The Handmaid’s Tale provide further examples. Dunleavy investigates the strategies that underpin the innovations, influence and success of complex serial drama, giving students and scholars a nuanced understanding of this contemporary TV form.

"More profound change and innovation has occurred in American television drama over the first two decades of the 21st century than is evident in all the years since its commercial introduction in 1944 up to the turn of the new millennium. Describing and analyzing this wondrous and disruptive transformation is the goal Trisha Dunleavy skillfully realizes in Complex Serial Drama and Multiplatform Television. Having coined the concept, complex serial, in Television Drama: Form, Agency, Innovation (2009), Dunleavy greatly expands upon this notion by adopting a multi-faceted approach to delineating the whys and wherefores of this still evolving high-concept post-generic format.  Wisely she begins by embracing television as a legacy term, grounding her examination in the political economy of U.S. TV today, and thus tracing the cross influences that started on the broadcast networks but are now reaching a much fuller potential in the cable-and-satellite and OTT streaming sectors. The subsequent chapters then take deep dives into how complex serial dramas have recently been remodeled and actualized as vehicles of heightened authorial expression, narrative sophistication, and individualized aesthetic style. Dunleavy puts all of your favorites under the microscope from The Sopranos to Mad Men to Stranger Things and many more. Trisha Dunleavy’s Complex Serial Drama and Multiplatform Television is a must-read for anyone interested in gaining a deeper appreciation as to why scripted dramas are better than they’ve ever been on American TV."

— Gary R. Edgerton is Professor of Creative Media and Entertainment at Butler University and Co-Editor of the Journal of Popular Film and Television.

Trisha Dunleavy is Associate Professor in Media Studies, Victoria University of Wellington, New Zealand. Her research focuses on television, in which the key areas of interest are TV drama, related institutions and industries, and national screen production cultures. Her earlier books include Television Drama: Form, Agency, Innovation (Palgrave Macmillan, 2009) and Ourselves in Primetime: A History of New Zealand Television Drama (Auckland University Press, 2005).