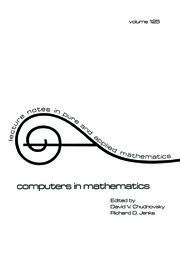 Talks from the International Conference on Computers and Mathematics held July 29-Aug. 1, 1986, Stanford U. Some are focused on the past and future roles of computers as a research tool in such areas as number theory, analysis, special functions, combinatorics, algebraic geometry, topology, physics,

DAVID V. CHUDNOVSKY is a Research Scientist in the Department of Mathematics at Columbia University in New York City, where he has served since 1978. Prior to this he was a research fellow in the Ukrainian SSR Academy of Sciences in Kiev, USSR, and Ecole Polytechnique in Paris, France, as well as a visiting professor at the Centre d'Etudes Nucleaires de Saclay in Gif-sur-Yvette, France, and charge de recherche at the Centre National de la Recherche Scientifique in Paris. Dr. Chudnovsky has authored or coedited several books on mathematics and physics, including A D. Sakharov's Collected Scientific Works (with D. ter Haar and G. V. Chudnovsky), Classical and Quantum Models and Arithmetic Problems (with G. V. Chudnovsky), Search Theory (with G. V. Chudnovsky), and Computer Algebra (with Richard D. Jenks) [all titles, Marcel Dekker, Inc.]. His research interests include mathematical physics, number theory, and computer algebra and complexity, and he has cochaired or been an invited lecturer at many conferences on these subjects. A Guggenheim Fellow in 1980, he is a member of the American Mathematical Society, American Physical Society, and American Association for Artificial Intelligence. Dr. Chudnovsky received the Ph.D. degree (1972) from the Institute of Mathematics of the Ukrainian SSR Academy of Sciences. RICHARD D. JENKS is Manager of the Computer Algebra Group, Mathematical Sciences Department, at IBM Thomas J. Watson Research Center, in Yorktown Heights, New York. He was a postdoctoral fellow at the applied mathematics department, Brookhaven National Laboratory, a visiting professor at the computer sciences department, University of Utah, and adjunct professor of computer science at New York University. Dr. Jenks joined the IBM Research Center in 1968 and was an originator and a principal architect of both the SCRATCHPAD I and SCRATCHPAD II computer algebra systems. Since then, his research has focused primarily on the design, implementation, and application of computer algebra systems, languages, and interfaces. Dr. Jenks is an active member of the Special Interest Group on Symbolic and Algebraic Manipulation (SIGSAM) of the Association for Computing Machinery (ACM), where he served as ACM national lecturer, national chairman of SIGSAM, and chairman or a member of the organizing committee for numerous computer algebra symposia and conferences. Dr. Jenks is past associate editor of ACM's Transactions of Mathematical Software and currently associate editor of the Journal of Symbolic Computation. Dr. Jenks received the Ph.D. degree in mathematics from the University of Illinois, Urbana.