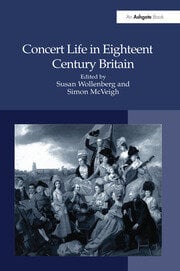 In recent years there has been a considerable revival of interest in music in eighteenth-century Britain. This interest has now expanded beyond the consideration of composers and their music to include the performing institutions of the period and their relationship to the wider social scene. The collection of essays presented here offers a portrayal of concert life in Britain that contributes greatly to the wider understanding of social and cultural life in the eighteenth century. Music was not merely a pastime but was irrevocably linked with its social, political and literary contexts. The perspectives of performers, organisers, patrons, audiences, publishers, copyists and consumers are considered here in relation to the concert experience. All of the essays taken together construct an understanding of musical communities and the origins of the modern concert system. This is achieved by focusing on the development of music societies; the promotion of musical events; the mobility and advancement of musicians; systems of patronage; the social status of musicians; the repertoire performed and published; the role of women pianists and the 'topography' of concerts. In this way, the book will not only appeal to music specialists, but also to social and cultural historians.

'... future researchers may be glad to happen upon individual chapters of great pertinence to their own interests...' The Consort 'This book undoubtedly makes a significant contribution to 18th-century music studies, in particular at the local or provincial level while also clarifying the nature and contexts of musical performance in the 18th century... one of this book's strengths is the manner in which one gains such a multi-faceted view of 18th-century musical life... Overall a picture of a remarkable level of musical activity emerges, as the concept of the concert took shape not only in London but throughout Britain.' Early Music '... admirably researched and ably edited...its editors have crafted a successful voume by selecting wisely from what must have been a range of good essays from an eponymous conference at Oxford.' Eighteenth-Century Studies