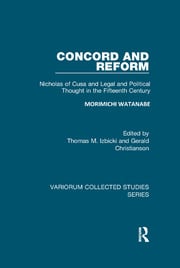 Concord and Reform: Nicholas of Cusa and Legal and Political Thought in the Fifteenth Century

Nicholas of Cusa is known as one of the most original philosophers of the 15th century, but by training he was a canon lawyer who received his degree from the University of Padua in 1423. The essays in this book analyse his legal and political ideas against the background of medieval religious, legal and political thought and its development in the Renaissance. The first two pieces deal with the legal ideas and humanism that affected Cusanus and with some of the problems faced by 15th-century lawyers, including his friends. The central section of the book also discusses how he reacted to the religious, legal and political issues of his day; Cusanus as reformer of the Church is a theme that runs through many of the essays. The final studies look at some of Cusanus' contemporaries, with special emphasis on Gregor Heimburg, the sharpest critic of Cusanus.