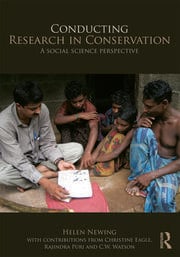 Conducting Research in Conservation is the first textbook on social science research methods written specifically for use in the expanding and increasingly multidisciplinary field of environmental conservation.

The first section on planning a research project includes chapters on the need for social science research in conservation, defining a research topic, methodology, and sampling. Section two focuses on practical issues in carrying out fieldwork with local communities, from fieldwork preparation and data collection to the relationships between the researcher and the study community. Section three provides an in-depth focus on a range of social science methods including standard qualitative and quantitative methods such as participant observation, interviewing and questionnaires, and more advanced methods, such as ethnobiological methods for documenting local environmental knowledge and change, and participatory methods such as the ‘PRA’ toolbox. Section four then demonstrates how to analyze social science data qualitatively and quantitatively; and the final section outlines the writing-up process and what should happen after the end of the formal research project.

This book is a comprehensive and accessible guide to social science research methods for students of conservation related subjects and practitioners trained in the natural sciences. It features practical worldwide examples of conservation-related research in different ecosystems such as forests; grasslands; marine and riverine systems; and farmland. Boxes provide definitions of key terms, practical tips, and brief narratives from students and practitioners describe the practical issues that they have faced in the field.

Helen Newing has a first degree from Reading University in Zoology and Psychology and an interdisciplinary PhD from the Psychology and Biological Sciences departments at Stirling University. She has carried out extensive fieldwork in Peru and West Africa both for the NGO sector and as an academic researcher, and has contributed to research and implementation projects in some 26 countries. Current research interests include protected areas governance, traditional knowledge and indigenous rights. Since 1999 she has worked as a lecturer at the Durrell Institute of Conservation and Ecology (DICE) in the School of Anthropology and Conservation at the University of Kent, where she has developed teaching materials on social science methods and interdisciplinarity for conservation students.

Christine Eagle has an MSc in Social Statistics and has been teaching research design and statistical analysis to conservation and anthropology students since the late 1990s at the University of Kent. She has participated in the design of research projects involving fieldwork both in the UK and in developing countries. She is passionately committed to improving students' numerical and statistical understanding, and promoting a mixed-methods approach to social science research that encompasses both quantitative and qualitative empirical methodologies.

Rajindra Puri is a Senior Lecturer in Environmental Anthropology and Ethnobiology at the University of Kent. He received his PhD in Anthropology from the University of Hawai'i in 1997 and has worked at the East-West Center in Honolulu and the Center for International Forestry Research (CIFOR) in Bogor, Indonesia. He co-authored CIFOR's Multidisciplinary Landscape Assessment (MLA) methodology, which integrates classic biodiversity assessment with ethnobotanical tools and anthropological methods to document local people’s priorities, values and knowledge of natural resources.This project produced a methods manual currently being used in several countries across the world. He is the author of Deadly Dances in the Bornean Rainforest, Hunting knowledge of the Penan Benalui (KITLV 2005), and the Bulungan Ethnobiology Handbook (CIFOR 2001), a regional study of plants and animals in Indonesian Borneo. His current research explores climate anthropology in Borneo and Europe.

C W (Bill) Watson is Emeritus Professor of Social Anthropology and Multi-Cultural Studies at the University of Kent and a past member of the Council of the Royal Anthropological Institute. His research has focused on issues including multiculturalism, the practice and politics of Islam in Indosesia, perceptions of gender, local village politics and textual criticism. He has over twenty years’ field experience, including field supervision of doctoral students, and has also worked as a consultant to industry. He has taught research ethics to anthropology postgraduates for ten years.

"Conducting Research in Conservation makes a much needed contribution to the field. Well written and highly accessible, this introduction to conservation-relevant social science methods will serve as a valuable resource for novices and experts alike. In particular, its practical guidance will help conservation professionals to navigate the complexities of social science research in the ‘real world.’" Dr Michael B. Mascia, World Wildlife Fund, USA.