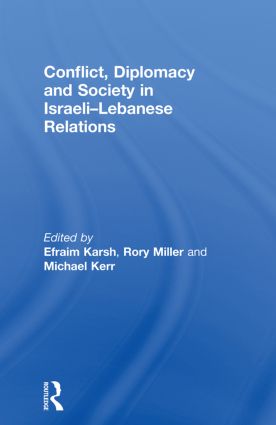 This book is a wide-ranging and innovative study of Israeli-Lebanese relations from the birth of the Jewish state in 1948 to the Israel-Lebanon War of 2006. Israel’s relationship with its Arab neighbours is a subject of perennial interest in the Middle East. The relationship between Israel and Lebanon has taken numerous forms since the establishment of the Jewish state in 1948 and the chapters in this timely and important volume provide a comprehensive, detailed and informative analysis of the evolving ties between the two countries up to the present day. The contributors are drawn from numerous disciplines in the social sciences and humanities; and contributions range from the impact of the Arab-Israeli conflict on the Jews of Lebanon, to the role of external powers (the EU, the US and Arab world) on Israeli-Lebanese relations, as well as the legal mechanisms regulating the bilateral political relationship to the Palestinian Refugee problem as a factor in Israeli-Lebanese relations.

1. The Evolution of Israeli-Lebanese Relations: From Implicit Peace to Explicit Conflict Hilal Khashan 2. Point of Departure: The 1967 War and the Jews of Lebanon Kirsten E. Schulze 3. 'A Positive Aspect to the Tragedy of Lebanon' - The convergence of US, Syrian and Israeli Interests at the Outset of Lebanon's Civil War Michael Kerr 4. History Revisited or Revamped? The Maronite Factor in Israel’s 1982 Invasion of Lebanon Laurie Eisenberg 5. The Israeli-Syrian-Lebanese Triangle-The Renewed Struggle over Lebanon Eyal Zisser 6. Between Israel and Lebanon: The Druze Intifawda of October 2007 John Maher 7. Lebanon 2006 and the Front of Legitimacy Alan Craig 8. Building Blocks for a Future Israeli-Lebanese Accord? Adir Waldman

Efraim Karsh is Professor of Mediterranean Studies at King's College London, UK. His most recent books include Islamic Imperialism: A History, and Arafat's War: The Man and his Battle for Israeli Conquest, and Empires of the Sand: The Struggle for Mastery in the Middle East, 1789-1923.

Michael Kerr is Professor of Conflict Studies at King's College London and Director of the Centre for the Study of Divided Societies. He is the author of Imposing Power Sharing: Conflict and Coexistence in Northern Ireland and Lebanon and editor of Lebanon: After the Cedar Revolution.

Rory Miller is Professor and Director of Middle East & Mediterranean Studies at King's College London. He is the author of Divided Against Zion: Opposition in Britain to a Jewish State in Palestine, 1945-1948 and Ireland and the Palestine Question, 1948-2004 ; Inglorious Disarray: Europe, Israel and the Palestinians since 1967; and editor of Palestine, Britain and Empire: The Mandate Years.