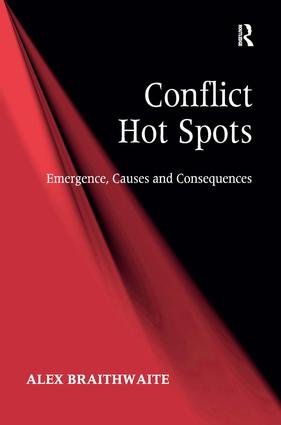 Militarized conflicts between states appear to occur repeatedly in the same geographic regions. Both World Wars and a series of interstate disputes in the post-Cold War system had their origins in the Balkans region of Eastern Europe. This study introduces the concept of a conflict hot spot to the broader empirical literature on conflict processes. It devotes considerable time to identifying the common causes and consequences of conflict hot spots across many regions globally, offering a theoretical and empirical contribution to the emerging literature on the spatiality of conflict processes. Rather than merely controlling for spatial dependence between episodes of conflict, the book incorporates this spatial dependence within a series of models of conflict behaviours and is, therefore, able to directly model the process of conflict diffusion.

'Many have examined geographical characteristics of conflict, but largely disregard whether states fight on home territory or elsewhere. Using new dispute location data, Braithwaite distinguishes conflict hosting from general participation. He convincingly demonstrates important differences between territorial security risks and decisions to fight, as well as how proximity to conflict clusters can create important security challenges.' Kristian Skrede Gleditsch, University of Essex, UK and International Peace Research Institute, Norway 'Conflict Hot Spots concerns an oft-ignored feature of contemporary conflicts: their tendency to cluster in time and space. Through efficient use of state-of-the-art data and methodology, it offers an impressive account of the origin, nature, and consequences of conflict hot spots. It is a must-read for students of international conflict and political geography alike.' Halvard Buhaug, International Peace Research Institute, Norway 'Alex Braithwaite’s Conflict Hot Spots resurrects the study of political geography and interstate conflict. His combination of cutting-edge geographic-information-systems and spatial statistics breathes new life into important questions about how place and conflict interact. It will be of great interest to both the specialist and the general reader.' Douglas Lemke, Pennsylvania State University, USA '… a welcome addition to the literature on international conflict… All in all, Alex Braithwaite’s volume makes a notable contribution to the study of conflict. It lays out a research agenda that the author - or other scholars interested in the subject - can pursue in a particularly understudied niche of the discipline. It is recommended for anyone interested in the academic pursuit of its subject matter.' The Cyprus Review

Alex Braithwaite is a Lecturer in International Relations at University College London, UK.