Conflict in Medieval Europe
Changing Perspectives on Society and Culture 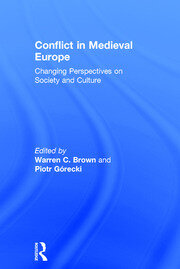 Conflict in Medieval Europe: Changing Perspectives on Society and Culture

Conflict is defined here broadly and inclusively as an element of social life and social relations. Its study encompasses the law, not just disputes concerning property, but wider issues of criminality, coercion and violence, status, sex, sexuality and gender, as well as the phases and manifestations of conflict and the behaviors brought to bear on it. It engages, too, with the nature of the transformation spanning the Carolingian period, and its implications for the meanings of power, violence, and peace. Conflict in Medieval Europe represents the 'American school' of the study of medieval conflict and social order. Framed by two substantial historiographical and conceptual surveys of the field, it brings together two generations of scholars: the pioneers, who continue to expand the research agenda; and younger colleagues, who represent the best emerging work on this subject. The book therefore both marks the trajectory of conflict studies in the United States and presents a set of original, highly individual contributions across a shifting conceptual range, indicative of a major transition in the field.

'The papers ... are always stimulating and thought-provoking, and the whole provides a fascinating conspectus of thinking about medieval history in the USA. It is unusual in presenting itself as [sic] in these terms, and the editors are to be congratulated on the way in which they have set out the issues.' English HIstorical Review 'Brown and GÃ³recki show in an exemplary way how to introduce an essay collection on Medieval studies, how to present the broad spectrum of sujbects in the collection, how to point the reader's own research into the right direction and how to create interest in the future developments in this subject area.' Historische Zeitschrift