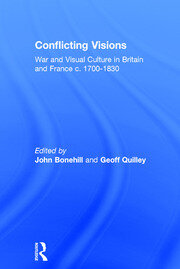 Conflicting Visions: War and Visual Culture in Britain and France, c. 1700-1830 offers the first systematic reappraisal of the cultural representation of war in Britain and France during the 'long' eighteenth century. This radical collection of essays explores the relation of visual imagery and aesthetics to conflict during this important period, drawing upon a wealth of materials including paintings and prints, maps and topographical drawings, commemorative sculpture and historical artefacts. The intriguing case studies reveal that military conflict was not a sphere of social activity separated from artistic culture but rather a determining factor in cultural production, and that war itself was largely comprehended, debated and experienced through those products. Key themes and preoccupations - how differing ideas of the public were predicated by the representation of war; how such notions were shaped by the imperial contexts of war; the relations between conflict, national identity and historical memory - are addressed to show that war served as a primary vehicle for the representation of numerous associated and contested issues, including patriotism and the idea of the nation, loyalty and opposition, heroism and masculinity, sympathy and sensibility.

Dr John Bonehill is Lecturer for the Department of History of Art at the University of Leicester, UK. Dr Geoff Quilley is Curator of Maritime Art at the National Maritime Museum, Greenwich, London, UK.