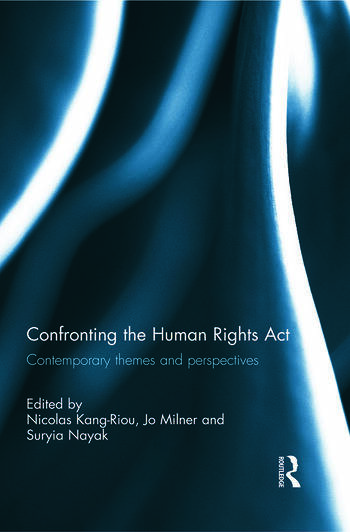 This book critically examines the Human Rights Act 1998 (HRA) and evaluates its impact from a multi-disciplinary perspective. The book includes both a domestic and international analysis of the effectiveness of the HRA, and also considers possible future developments in policy and practise as well as contemplating the potential for a British Bill of Rights. The editors have collected pieces from contributors drawn from diverse spheres, all of whom are internationally recognised for their impact in the field of human rights law. Contributors include members of the bench in the United Kingdom and Australia, academics, researchers, members of NGOs, and campaigners as well as people’s testimony of lived experiences in relation to the Human Rights Act. Valuable contributions from the likes of Costas Douzinas, Keith Ewing, Helen Fenwick, Lady Hale, Irene Khan, Michael Kirby, Francesca Klug, Peter Tatchell and others have resulted in a book which draws out the connections between legal framework, theory, and the actual experience of the protection afforded to groups and individuals by the HRA.

Confronting the Human Rights Act 1998 will be of particular interest to scholars and students of Law, International Studies and Political Science.

Introduction, Nicolas Kang-Riou, Jo Milner and Suryia Nayak  1. Confronting the legalisation of human rights: a counterpoint, Nicolas Kang-Riou   Part 1:Confronting the HRA as a legal tool  2. The HRA: origins and intentions, Francesca Klug  3. High points and low points in the first 10 years: a view from the Bench, Lady Hale  4. Human rights protection in Australia: the Commonwealth's odd one out?, Michael Kirby  5. Inspired by the HRA: the Victorian Charter of Human Rights and Responsibilities, Diane Sisely   Part 2: Topical confrontations of the HRA  6. The HRA in an age of terror, Irene Kahan  7. "Repatriating" Churchill's legacy, Keith Ewing  8. Limits and achievements of the HRA from the socio-economic point of view: the HRA, poverty and social exclusion, Alice Donald and Elizabeth Mottershaw  9. The Human Rights Act and assisted suicide: the (most) unkindest cut of all?, Jo Milner and Lisbeth Bourne   Part 3: Activist Confrontations  10. What potential does the HRA hold for domestic violence groups?, Ronagh McQuigg  11. Feminism, women, rape and social change, Catherine Little and Kate Cook  12. Testimony, tolerance and hospitality: The limitations of the HRA in relation to asylum seekers, Suryia Nayak and Revive & The Salford Forum for Refugees & People Seeking Asylum United for Change Campaign Group  13. The politics of protest and the HRA, Peter Tatchell  14. Blacklilsting of trade-unionists: What is the point of human rights law?, Dave Smith and Keith Ewing   Part 4: The future? Confronting the Bill of Rights  15. Security, citizenship and responsibilities beyond the HRA: Towards a British Bill of Rights and Responsibilities in the UK  16. The HRA or a British Bill of Rights: Riding back on human rights' protection?, Helen Fenwick

Nicolas Kang-Riou is a lecturer at the university of Salford and is currently researching the concepts of truth and virtue in relation to human rights law and international law.

Jo Milner is a lecturer in Sociology at the University of Salford whose research interests focus on the areas of public law, identity politics, social exclusion, discrimination, and human rights.

Suryia Nayak is Senior lecturer in Social Work at the University of Salford, with a particular interest in psychoanalysis, feminism, post-colonialism and deconstructism.