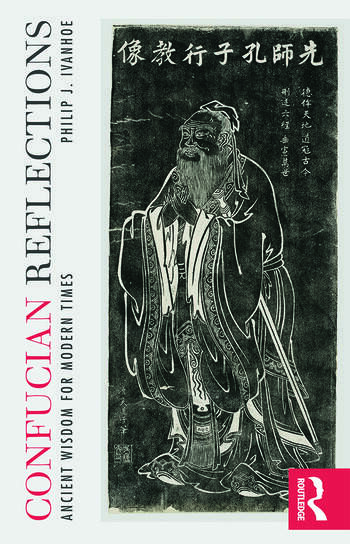 Confucian Reflections: Ancient Wisdom for Modern Times is about the early Chinese Confucian classic the "Analects" Lunyu, attributed to the founder of the Confucian tradition, Kongzi (551-479 bce) and who is more commonly referred to as "Confucius" in the West. Philip J. Ivanhoe argues that the Analects is as relevant and important today as it has proven to be over the course of its more than 2000 year history, not only for the people who live in East Asian societies but for all human beings. The fact that this text has inspired so many talented people for so long, across a range of complex, creative, rich, and fascinating cultures offers a strong prima facie reason for thinking that the insights the Analects contains are not bound by either the particular time or cultural context in which the text took shape.

This book is a real treasure. P. J. Ivanhoe is one of the world's most respected scholars in the field of early Chinese thought. In his new book he brings his great learning to bear in helping us understand the Analects of Confucius, one of the most influential books in world history, as it was originally intended. But he does much more. He draws the reader into the text by showing how it speaks to us as moderns, wherever we may live or whatever other traditions are meaningful to us. In particular he shows us how the Analects provides new insights with respect to how we live our lives, insights with respect to ritual, music and the very meaning of daily life itself. It is a short book that gives us a great deal to think about and that any educated reader can appreciate.

P. J. Ivanhoe is among the most important comparative philosophers ever. Ivanhoe is a leading light in the interpretation of classical Chinese philosophy, deeply steeped in Western philosophy, and committed to an inspiring mission for cross-cultural philosophy: to expose us to the best among the multifarious options for flourishing, for being human, for understanding ourselves and what a good life consists in.

Confucian Reflections is a wonderful book, a crystal clear and heartfelt essay on what we in the West have to learn from Confucius about respect for tradition, the social nature of the self, about virtue, the family, and ultimately about human excellence. This is one of those rare book where one feels the steady presence of a wise and caring guide gently teaching about how the wisdom of the ages matters to us cosmopolitan liberals in the 21st century.

This is, quite simply, the most accessible, engaging, and lucid introduction to Confucius and the Analects by one of the world’s leading scholars of Chinese philosophy. Ivanhoe writes with a remarkable clarity and a masterful grasp of both Chinese and Western philosophical traditions. He offers refreshing and fascinating interpretation of the Analects, exploring various ways in which we can bring Confucian wisdom to life for our times. A book on what Confucius can still teach us today has long been overdue and Ivanhoe is the perfect scholar to write it.

How to understand Confucianism as a living wisdom from which inspirations for becoming a consummate person in a bigger and more complicated modern community can be drawn? This book as an introduction is second to none. It is readable, concise, not pedantic at all, but deeply rooted in his acknowledged mastery of Confucian classics and relevant modern scholarship as well.