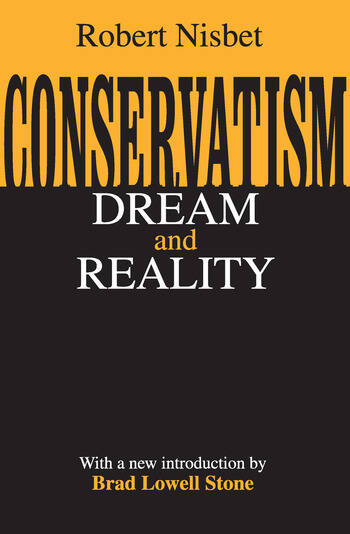 The essential concerns of conservatism are the same as those that motivated Nisbet's first and most influential book, The Quest for Community. In fact, Conservatism unites virtually all of Nisbet's work. In it, Nisbet deals with the political causes of the manifold forms of alienation that underwrite the human quest for community. The sovereign political state is more than a legal relationship of a superstructure of power, it is inseparable from its successive penetrations of man's economic, religious, kinship and local allegiances, and its revolutionary dislocations of established centers of power.Nisbet holds that although political philosophers are often conceived in terms of their views of the individual and the state, a more useful approach adds the factor of social groups or communities mediating between the individual and the state. Such groups comprise "society" the protection of which is the "sole object" of the conservative tradition, according to Nisbet. This conservative ideology arose in the West as a reaction to the French Revolution and its perceived impact upon traditional society. Edmund Burke was the first spokesman of the new ideology. In this book, Nisbet argues that modern conservatism throughout the West can be seen as a widening of Burke's indictment not only of the French Revolution, but of the larger revolution we have come to call modernity.From Edmund Burke and his contemporaries such as Bonald, de Maistre, Haller, and Savigny, down to T.S. Eliot, Christopher Dawson, Michael Oakeshott, Irving Babbit, Paul Elmer More, and Russell Kirk, the essential themes of political conservatism remained the same. They are centered upon history, tradition, property, authority, liberty and religion, and attack equally the political collectivism and radical individualism that have the same irrational outcomes. Nisbet makes the point that, at present, conservatism is also in a crisis, one created in large measure by mixing in the political arena economic liberalism and welfare state socialism - a lethal mix for conservative politics.