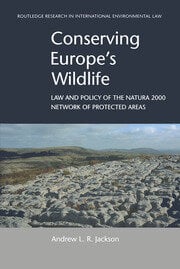 Conserving Europe's Wildlife: Law and Policy of the Natura 2000 Network of Protected Areas

The Natura 2000 network of protected areas is the centrepiece of European Union nature policy, currently covering almost one-fifth of the EU’s entire land territory plus large marine areas. This vast EU-wide network, which aims to conserve Europe’s most valuable and threatened species and habitats, has major impacts on land use throughout all Member States of the EU. This book critically assesses the origins and implementation of the Natura 2000 network, established under the Birds Directive of 1979 and the Habitats Directive of 1992.

Based on original archival research and interviews with key participants, the book records a detailed history of the origins and negotiation of Natura 2000 policy and law, with the history of EU environmental policy provided as a framework. An historical institutionalist approach is adopted, which emphasises the importance of understanding legal and policy development as processes that unfold over time. Three phases in the history of EU environmental policy are identified and described, and the history of EU nature policy is placed within the context of these three phases. Informed by this history, the author presents a comprehensive summary and assessment of the law and policy that protects Natura 2000 sites at EU level, and reviews the nature conservation outcomes for the targeted species and habitats. The book reveals how a knowledge of the history of Natura 2000 enriches our understanding of key issues such as conflicts in establishing and conserving the Natura 2000 network, EU integration in the field of nature conservation, and the future of EU nature policy.

Chapter 3: Towards an EU Birds Directive

Chapter 4: Negotiation of the Birds Directive (1976-1979) and its early implementation

Chapter 5: Towards an EU Habitats Directive

Chapter 7: Negotiating the Habitats Directive I: the Greek and Spanish presidencies (July 1988 to June 1989)

Chapter 9: Negotiating the Habitats Directive III: the Luxembourg and Dutch presidencies (January 1991 to December 1991) and adoption of the directive in May 1992

Chapter 10: Implementation and the law of Natura 2000

Andrew L. R. Jackson is an Assistant Professor in environmental and planning law, UCD Sutherland School of Law, University College Dublin, Ireland. He is a graduate of Oxford University (BA, Law) and of Cambridge University (LLM). He also holds an MSc in Biodiversity and Conservation from Trinity College Dublin (TCD) and a PhD from TCD on EU environmental policy and law. He previously worked for the international law firm Slaughter and May in London and Paris; for the UK government's legal service, in the Department for Environment, Food and Rural Affairs (Defra); and with NGOs Friends of the Irish Environment and An Taisce, the National Trust for Ireland, where he was Natural Environment Officer and in-house Solicitor. Dr Jackson has been involved in public interest environmental and planning cases for many years, including before the Irish, English and EU courts.

"Dr Andrew Jackson is to be congratulated on this remarkable book. At a time when the United Kingdom’s departure from the European Union is dominating the political agenda, his comprehensive study of the origins, negotiating history and implementation of the EU’s Birds and Habitats Directives bears witness to the huge impact – at least in the field of nature protection – that EU legislation has had." - Stanley Johnson, Author, Environmental Campaigner and former MEP, UK.

"Overall, the book provides an exceptionally thorough analysis of the origin of the Natura 2000 network and the long process of its development and implementation". - Rebecca Nesbit, The Niche, British Ecological Society