Consociational Theory
McGarry and O’Leary and the Northern Ireland conflict 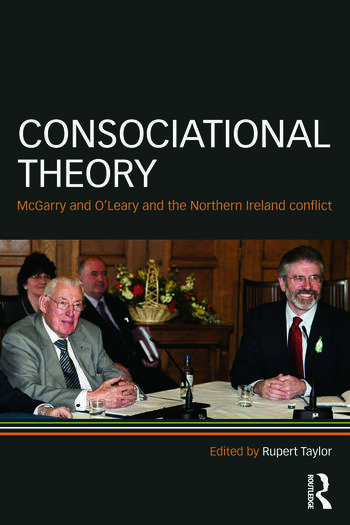 Consociational Theory: McGarry and O’Leary and the Northern Ireland conflict

Consociational power sharing is increasingly gaining ground, right around the world, as a means for resolving political conflict in divided societies. In this volume, edited by Rupert Taylor, nineteen internationally-respected scholars engage in a lively debate about the merits of the theory underlying this approach.

Taken as a whole, this volume, structured as a symposium around the highly-influential argument of John McGarry and Brendan O’Leary, offers comparative, engaging, and critical insight into how political theory can contribute to the creation of a better world.

Consociational Theory is an important text for anyone with an interest in political theory, conflict resolution in divided societies, or Irish politics.

Rupert Taylor is Associate Professor of Politics at the University of the Witwatersrand, Johannesburg, South Africa.

'Power-sharing theory develops from its constructive as well as its negative critics. This volume represents a wonderful continuation of the debate about consociational (power-sharing) theory. This theory had already undergone significant changes by some of the scholars who reformulated it in political science in the 1960s and the 1970s – including Gerhard Lehmbruch, Jürg Steiner, Luc Huyse, and myself. I am very pleased that this superb new book, focused on the work of John McGarry and Brendan O’Leary, continues to debate highly significant adjustments and refinements. It is a splendid milestone in the development of consociational theory.'
Arend Lijphart, Research Professor of Political Science, University of California, San Diego

'Rupert Taylor has put together a set of essays that crystallize the controversies surrounding consociationalism. This is bound to be an important and controversial collection.'
Donald L. Horowitz, James B. Duke Professor of Law and Political Science, Duke University

'A timely, stimulating, and well-written exchange. Consociational Theory offers an illuminating debate about the value of power-sharing as the answer to Northern Ireland’s divisions, and, more broadly, to other societies entertaining power-sharing as a solution to deep divisions. It should be read by lay readers and specialists alike.'
Michael MacDonald, Professor of Political Science, Williams College, Massachusetts