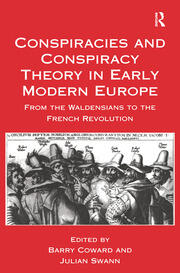 Conspiracies and Conspiracy Theory in Early Modern Europe: From the Waldensians to the French Revolution

For many generations, Guy Fawkes and his gunpowder plot, the 'Man in the Iron Mask' and the 'Devils of Loudun' have offered some of the most compelling images of the early modern period. Conspiracies, real or imagined, were an essential feature of early modern life, offering a seemingly rational and convincing explanation for patterns of political and social behaviour. This volume examines conspiracies and conspiracy theory from a broad historical and interdisciplinary perspective, by combining the theoretical approach of the history of ideas with specific examples from the period. Each contribution addresses a number of common themes, such as the popularity of conspiracy theory as a mode of explanation through a series of original case studies. Individual chapters examine, for example, why witches, religious minorities and other groups were perceived in conspiratorial terms, and how far, if at all, these attitudes were challenged or redefined by the Enlightenment. Cultural influences on conspiracy theory are also discussed, particularly in those chapters dealing with the relationship between literature and politics. As prevailing notions of royal sovereignty equated open opposition with treason, almost any political activity had to be clandestine in nature, and conspiracy theory was central to interpretations of early modern politics. Factions and cabals abounded in European courts as a result, and their actions were frequently interpreted in conspiratorial terms. By the late eighteenth century it seemed as if this had begun to change, and in Britain in particular the notion of a 'loyal opposition' had begun to take shape. Yet the outbreak of the French Revolution was frequently explained in conspiratorial terms, and subsequently European rulers and their subjects remained obsessed with conspiracies both real and imagined. This volume helps us to understand why.

Contents: Introduction, Barry Coward and Julian Swann; Detecting the ultimate conspiracy, or how Waldensians became witches, Wolfgang Behringer; Conspiracy and its prosecution in Italy, 1500-50: violent responses to violent solutions, Kate Lowe; Huguenot conspiracies, real and imagined, in 16th century France, Penny Roberts; Vengeance and conspiracy during the French Wars of Religion, Stuart Carroll; 'The monarchical republic of Elizabeth I' revisited (by its victims) as a conspiracy, Peter Lake; The paranoid prelate: Archbishop Laud and the puritan plot, Jason Peacey; The closest bond: conspiracy in 17th century French tragedy, Malina Stefanovska; Faults on both sides: the conspiracies of party politics under the Later Stuarts, Mark Knights; 'Popery at St. James's': the conspiracy theses of William Payne, Thomas Hollis, and Lord George Gordon, Colin Haydon; Conspiracy and political practice from the ancien régime to the French Revolution, Peter Campbell; Burke and the conspiratorial origins of the French Revolution: some Anglo-French resemblances, Nigel Aston; 'The Tartuffes of patriotism': fears of conspiracy in the political language of revolutionary government, France 1793-94, Marisa Linton; The 'foreign plot' and the French Revolution: a reappraisal, Munro Price; Index.

'These fascinating essays, through their respective declensions of the theme of conspiracy, successfully impress upon the reader the importance of this mode of discourse for understanding the politics of early modern Europe.' History '... lively and stimulating...The volume should find a place on reading lists for comparative courses on early modern cultural and political history.' Sixteenth Century Journal