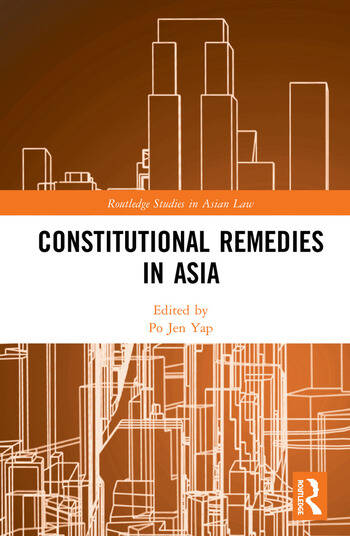 Examining cases from Hong Kong, Bangladesh, Indonesia, India, and the Philippines, this collection of essays examines four novel constitutional remedies which have been judicially adopted - Prospective Invalidation, Suspension Order, Remedial Interpretation, and Judicial Directive - that blurs the distinction between adjudication and legislation.

Po Jen Yap is a Professor at The University of Hong Kong (HKU), Faculty of Law, where he specialises in Constitutional and Administrative law. He graduated from the National University of Singapore with an LLB degree and he obtained LLM qualifications from both Harvard Law School and University College London. He also has a PhD degree from the University of Cambridge. He is an Advocate and Solicitor of the Supreme Court of Singapore and an Attorney at Law in the State of New York (USA). He is the author and editor of over 50 books, book chapters, journal articles, and case commentaries. His first sole-authored monograph Constitutional Dialogue in Common Law Asia, published in 2015, was awarded HKU's University Research Output Prize in 2016. He is also the recipient of HKU's 2016 Outstanding Young Researcher Prize. His second sole-authored monograph Courts and Democracies in Asia was published in late 2017.

'By taking us on an eye-opening tour of constitutional remedies in Asia, this fascinating collection of essays broadens the landscape of comparative constitutional analysis.  Not only does it open up new territory, it also deepens our understanding of remedies by highlighting the multiple ways in which judges seek to engage political actors in the joint endeavour of making rights real.' - Aileen Kavanagh, Professor of Constitutional Law, University of Oxford, UK

'This volume brings important developments in Asia into comparative constitutional debates that have overwhelmingly focused on the U.K., Canada, and New Zealand. Combining theoretical engagement with on-the-ground experiences, it makes a valuable contribution and will broaden the scholarly conversations.' - Robert Leckey, Dean of the Faculty of Law and Samuel Gale Professor, McGill University, Canada

'A fascinating and rich systematic study of the under-studied but vital topic of comparative constitutional remedies. Constitutional Remedies in Asia is path-breaking scholarship which makes many deep connections between various remedies devised by courts and the political systems within which they operate. Essential reading for those interested in comparative constitutional law.' - Kent Roach, CM, FRSC, Prichard Wilson Chair in Law and Public Policy, University of Toronto, Canada

'Constitutional Remedies in Asia is a sophisticated collection of chapters on an understudied aspect of judicial power and creativity. The volume illustrates the power of comparative analysis, integrating diverse country experiences into a common framework, and opens up new angles for courts and scholars.' - Tom Ginsburg,  Leo Spitz Professor of International Law, University of Chicago, USA