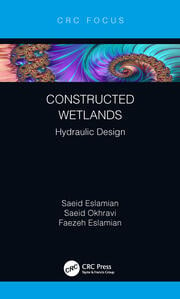 Constructed Wetlands: Hydraulic Design provides fundamental information on internal wetland hydraulic and biochemical processes, as well as practical guidance on the effective design of wetlands for water treatment. It includes the latest innovations and technological advances of constructed wetlands based on the newest technologies in the field.

This book will serve as a valuable resource for practicing professionals, researchers, policy makers, and students seeking to gain an in-depth understanding of the hydraulic processes involved in constructed wetlands water treatment systems.

Saeid Eslamian is a full professor of environmental hydrology and water resources engineering in the Department of Water Engineering at Isfahan University of Technology, where he has been since 1995. His research focuses mainly on statistical and environmental hydrology in a changing climate. In recent years, he has worked on modeling natural hazards, including floods, severe storms, wind, drought, pollution, water reuses, sustainable development and resiliency, etc. Formerly, he was a visiting professor at Princeton University, New Jersey, and the University of ETH Zurich, Switzerland. On the research side, he started a research partnership in 2014 with McGill University, Canada. He has contributed to more than 600 publications in journals, books, and technical reports. He is the founder and chief editor of both the International Journal of Hydrology Science and Technology (IJHST) and the Journal of Flood Engineering (JFE). Eslamian is now associate editor of three important publications: Journal of Hydrology (Elsevier), Eco-Hydrology and Hydrobiology (Elsevier), Journal of Water Reuse and Desalination (IWA) and Journal of the Saudi Society of Agricultural Sciences (Elsevier). Professor Eslamian is the author of approximately 35 books and 180 chapter books.

Professor Eslamian was selected as an outstanding reviewer for the Journal of Hydrologic Engineering in 2009 and received the EWRI/ASCE Visiting International Fellowship in Rhode Island (2010). He was also awarded outstanding prizes from the Iranian Hydraulics Association in 2005 and Iranian Petroleum and Oil Industry in 2011. Professor Eslamian has been chosen as a distinguished researcher of Isfahan University of Technology (IUT) and Isfahan Province in 2012 and 2014, respectively. In 2016, he was a candidate for national distinguished researcher in Iran.

Professor Eslamian finished Hakimsanaei High School in Isfahan in 1979. After the Islamic Revolution, he was admitted to IUT for a BS in water engineering and graduated in 1986. After graduation, he was offered a scholarship for a master’s degree program at Tarbiat Modares University, Tehran. He finished his studies in hydrology and water resources engineering in 1989. In 1991, he was awarded a scholarship for a PhD in civil engineering at the University of New South Wales, Australia. His supervisor was Professor David H. Pilgrim, who encouraged him to work on "Regional Flood Frequency Analysis Using a New Region of Influence Approach." He earned a PhD in 1995 and returned to his home country and IUT. In 2001, he was promoted to associate professor and in 2014 to full professor. For the past 24 years, he has been nominated for different positions at IUT, including university president consultant, faculty deputy of education, and head of department. Eslamian is now director for center of excellence in Risk Management and Natural Hazards (RiMaNaH).

Professor Eslamian has made three scientific visits to the United States, Switzerland, and Canada

in 2006, 2008, and 2015, respectively. In the first, he was offered the position of visiting professor by Princeton University and worked jointly with Professor Eric F. Wood at the School of Engineering and Applied Sciences for one year. The outcome was a contribution in hydrological and agricultural drought interaction knowledge by developing multivariate L-moments between soil moisture and low flows for northeastern U.S. streams.

is a PhD candidate of hydraulic engineering and research assistant at Bu-Ali Sina University (BASU), Hamadan, Iran. He is currently working on the numerical simulation of flow-structure-sediment interactions on bridge pier scour with the aid of Faculty of Engineering of University of Porto (FEUP), Porto, Portugal. He earned both his Bachelor’s degree in water engineering specializing in rainwater harvesting systems and a master degree in hydraulic engineering with a specialization in investigation on hydraulic behaviour and treatment efficiency of a constructed wetland from Isfahan University of Technology (IUT), Iran.

Saeid was selected as the best PhD student among the students of water engineering department of Bu-Ali Sina University for three years in a row, 2016, 2017, and 2018. Also in 2018, he was awarded outstanding prizes as one of the excellent PhD students based on educational-research perspective from both Ministry of Science, Research and Technology and Iran's National Elites Foundation and received the Visiting International scholarship in FEUP, Porto, Portugal.

is a PhD candidate of Bioresource Engineering in McGill University. Her research focuses on the development of a novel lime-based product to mitigate phosphorus loss from agricultural fields. Faezeh completed her bachelor and master’s degrees in Civil and Environmental Engineering from Isfahan University of Technology, Iran where she evaluated natural and low-cost absorbents for the removal of pollutants such as textile dyes and heavy metals. Furthermore, she has conducted research on the worldwide water quality standards and wastewater reuse guidelines. Faezeh is an experienced multidisciplinary researcher with interest in soil and water quality, environmental remediation, water reuse and drought management.