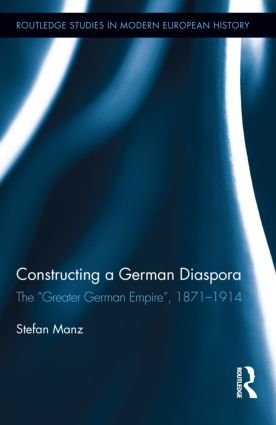 This book takes on a global perspective to unravel the complex relationship between Imperial Germany and its diaspora. Around 1900, German-speakers living abroad were tied into global power-political aspirations. They were represented as outposts of a "Greater German Empire" whose ethnic links had to be preserved for their own and the fatherland’s benefits. Did these ideas fall on fertile ground abroad? In the light of extreme social, political, and religious heterogeneity, diaspora construction did not redeem the all-encompassing fantasies of its engineers. But it certainly was at work, as nationalism "went global" in many German ethnic communities. Three thematic areas are taken as examples to illustrate the emergence of globally operating organizations and communication flows: Politics and the navy issue, Protestantism, and German schools abroad as "bulwarks of language preservation." The public negotiation of these issues is explored for localities as diverse as Shanghai, Cape Town, Blumenau in Brazil, Melbourne, Glasgow, the Upper Midwest in the United States, and the Volga Basin in Russia. The mobilisation of ethno-national diasporas is also a feature of modern-day globalization. The theoretical ramifications analysed in the book are as poignant today as they were for the nineteenth century.

*A CHOICE Outstanding Academic Title of 2015*

"A wonderful book. […] The range of Manz's research is quite extraordinary and the sensitivity of his analysis does full justice to the range of locations he considers. […] Stefan Manz's study of the relationship between Imperial Germany and its diaspora presents a mass of fascinating information and sheds new light on every topic it broaches. It is a major achievement."

- Joachim Whaley, University of Cambridge, in Journal of European Studies

"This work, one of the best this reviewer has seen in over 30 years, is a model of historical scholarship and stylistic clarity, and belongs in every academic library. Manz covers an enormous amount of ground looking at various locations worldwide, and unpretentiously but deftly draws on contemporary migration theory. Summing Up: Essential."

"The scope of this study is breathtaking. It presents a highly persuasive thesis, backed by a very broad range of evidence. Manz presents here a very significant contribution to the field, and a model for the study of other diaspora nationalisms."

"This book encourages us to rethink the modes of belonging that informed many German subjectivities during the Kaiserreich."

"Constructing a German Diaspora is a groundbreaking scholarly contribution that will be respected and influential for years to come. Manz’s task was colossal, but with his careful attention to the material, he has succeeded in pushing immigration studies in new directions…A major achievement."

"Manz provides a uniquely global approach to both nation-building and noisy nationalism. The perspective from the Reich outward and the diasporic communities inward permits fascinating insights based on research in five continents and supported by vivid quotes from nationalists’ writings. Manz skillfully weaves the many strands into a coherent and convincing analysis."

"Since the 1980s we have seen a reinterpretation of the German diaspora by German professors led by Klaus J. Bade and Dirk Hoerder. We can see the volume written by Manz as a worthy continuation of the efforts of these two leading German historians. Manz has written a major study on the process of diaspora construction in the decades between German unification and the outbreak of the First World War which will prove essential reading for anybody interested in the historical origins of diaspora and transnationalism and in the rise of German nationalism on a global scale."

"Manz innovatively links different world regions with each other and with Imperial Germany. It is hoped that Manz’s work, with its pioneering global approach, will stimulate further in-depth research on the creation of regional diasporas and similar transnational studies on migration."

"Manz's novel approach brings out the interplay between 'nation' and 'diaspora' - both symbolically and spatially. The transnational perspective allows Manz to partly unhinge the analytical separation between metropole and periphery and regard both as a shared and permeable space in which migration and nation are being negotiated. In this perspective lies the innovative and ambitious claim of the monograph."

"The book is a welcome and well-founded discussion of historical efforts to foster active diaspora politics. [It] constitutes an innovative nexus of new approaches in migration history and nationalism research with a global reach."

"The study will be an indispensable standard work for years to come."

“An extremely thorough study and a very timely one, bringing together issues of identity, belonging and nationhood in a truly global context. […] considers the concept of diaspora as a much more appropriate and significant aspect of German history than has heretofore been acknowledged”

"Constructing a German Diaspora impresses with the scope and detail of its research, as well as the persuasiveness of its central arguments. It stands out as a monograph taking a global approach to the German diaspora and its considerable influence on politics in Imperial Germany"

"Manz has written an important book based on extensive source material. […] impressive."

Stefan Manz is a Reader in German at Aston University, Birmingham, UK, and a Fellow of the Royal Historical Society.