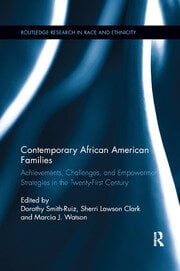 For decades the black community has been perceived, both in the United States and around the world, as one which thinks alike, acts alike and lives alike - in poor and downtrodden environments. Following the persistent effects of the great recession and the American elections of 2008, now more than ever the political and socio-economic state of America is crying out for this deficient and prejudiced conception to be dispelled.

Focusing primarily on black families in America, Contemporary African American Families updates empirical research by addressing various aspects including family formation, schooling, health and parenting. Exploring a wide class spectrum among African American families, this text also modernizes and subverts much of the research resulting from Moynihan’s 1965 report, which arguably misunderstood the lived experiences of black people during the movement from slavery to freedom in a Jim Crow society.

Dorothy Smith-Ruiz is Associate Professor of Africana Studies and Sociology at the University of North Carolina at Charlotte.

is Assistant Professor of Elementary Education at Towson University in Baltimore County, Maryland.

Contemporary African American Families, written in a style that would be accessible to undergraduates, provides an important supplement to the many texts and readers on African American families that focus primarily on within-family dynamics. By taking a look at various structural factors—education, incarceration, housing, and other public policies, this collection of articles delivers a structural framework and an essential social context within which to study today’s Black families.

Contemporary African American Families is a truly comprehensive and compelling attempt to place "the Black family" in an analytically and politically robust social and conceptual context. It asks questions about what everything from mass incarceration and housing discrimination to Diasporic differences and health disparities mean for the everyday lives and macrostructural possibilities of African American family members—fathers, mothers, grandparents, and children. This book takes a traditional social scientific subject and drags it undeniably into the present. Clearly written, it will work well in classrooms and for more casual readers simply interested in learning more about the topic.

John L. Jackson, Jr., author of Real Black: Adventures in Racial Sincerity and Dean of the School of Social Policy & Practice at the University of Pennsylvania.