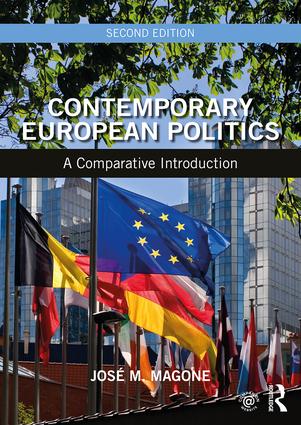 Revised throughout, the second edition of this comprehensive and highly respected textbook continues to provide a thorough introduction to European and European Union politics.

Pairing a genuinely comparative approach with in-depth analysis of the national, supranational, local and regional political systems of large and small countries across Europe, including Central and Eastern Europe and the Balkans, this accessible book covers history, theory, institutions, parties and party systems, and interest groups, among others.

Key topics and features of this book:

Richly illustrated throughout, this work is an indispensable resource for all students and scholars of European politics.

Praise from the first edition:

"Ambitious in scope, impressive in its mastery of historical detail and contemporary theory, bold in its methods – and highly readable. Magone’s work is destined to become a classic reference for any student of European politics."David Hanley, Professor Emeritus of European Studies, Cardiff University, UK

"With a rare combination of encyclopaedic knowledge and analytical skills, this engaging textbook takes Europe back to where the action is. José Magone’s pan-European approach offers a comprehensive and careful view of European politics since the fall of the Berlin Wall and provides a truly comparative basis for understanding the most recent dynamics of Europe at different levels. The result is a book which is an invaluable addition to the literature."

Praise for this edition:

"A sweeping buffet of facts and arguments analyzing change in Europe from the 17th century to 2018. A useful blend of theory and empirics for those who want an accessible introduction to a diverse region."

2. The Historical Development of European Politics

3. The Transformation of European Politics

5. The Diversity of Parliamentarianism in Multilevel Europe

10. National Politics and the European Union

José M. Magone is Professor in Regional and Global Governance at the Berlin School of Economics, and Law, Germany. He was previously Reader in European Politics at the University of Hull, UK. Among his 16 books are the edited volumes The Politics of Contemporary Portugal (2014), Routledge Handbook of European Politics (2015), Core-Periphery relations in the European Union (with Brigid Laffan and Christian Schweiger, 2016), The Statecraft of Consensus Democracies (2017), and Contemporary Spanish Politics (third edition, 2018).