Contemporary France
Essays and Texts on Politics, Economics and Society 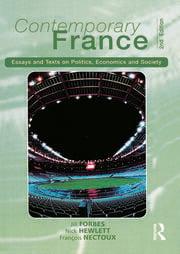 Contemporary France: Essays and Texts on Politics, Economics and Society

In one stimulating source this successful text provides a rigorous analysis of the political, economic and social developments in post-war France. The analysis is supported by specially selected French language texts and exercises. This text is suitable for undergraduate students of French (especially within a languages, social science, or business course) and for courses in French Studies and European Studies.

List of figures and tables.List of texts. List of abbreviations.Acknowledgements.Preface to the first edition.Preface to the second edition.Introduction.Part I Politics in France.Introduction; 1945 - 81: Instability, conflict and revolt; The left: swords into social democracy; The right: from standard bearer of the Republic to ordinary political actor; Foreign relations and defence: from colonial imbroglio to quasi-consensus; Conclusion: the death of conflict - a much exaggerated rumour? ; Notes; Suggestions for further reading; Texts and exercises. Part II The French Economy.Introduction; Growth and crisis in the production system; The labour force and the unemployment crisis; Regional revolutions: the geographical distribution of the French economy; International competition: Opening the economy to the rest of the world; Distributing incomes; The changing role of the state and public sector; Conclusion: problems and expectations for the new century; Notes; Suggestions for further reading; Texts and exercises. Part III Contemporary French Society.Introduction; From country to city; Social structure of post-war France; Population, family and social policy; Work, leisure and life-styles; Social institutions: the army, the church, the mass media and the education system; Convergences and differences in French society; Conclusion; Notes; Suggestions for further reading; Texts and exercises. Chronology. Index.