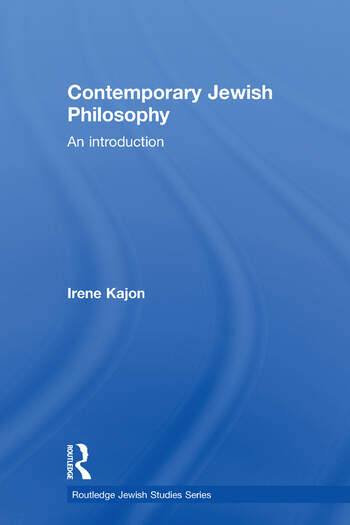 This text introduces the most important Jewish philosophers of contemporary times from the point of view of their original approach to both Judaism and philosophy and include: Hermann Cohen, Franz Rosenweig, Martin Buber, Leo Strauss, Emmanuel Levinas.

It shows how for them the dialogue between Judaism and philosophy is necessary in order to avoid on one side, an attachment to Jewish tradition which is only nationalistic or non-rational; and on the other, an idea of philosophy which first of all focuses the problems of nature, human existence in the world, or God as the origin of being.

In reconstructing the intellectual evolution of each of these twentieth-century philosophers with a view to their meaning today, this book is unique and goes beyond the standard historical account provided by other books. Contemporary Jewish Philosophy is essential reading for researchers and students of philosophy, Judaism and the history of religions.

Part 1: Premises  1. The Parabola of Western Humanism  2. The Witness in Primo Levi's If This is a Man  3. Philosophical Tradition, Judaism, New Thought  Part 2: Hermann Cohen (1842-1918)  1. The Contrast between Mechanism and Freedom in the Early Writings  2. Interpreting the Kantian Doctrine of the 'a priori' in the Works on Kant  3. The Idea of Humanity as Producer of Culture in the Philosophical System  4. The Problems of the Individual and the Foundation of Ethics in the Jewish Writings  5. The Identification of Reason with Religious Love in the Opus Postumum  Part 3: Franz Rosenzweig (1886-1929)  1. Searching for the Ideal Man in the Diaries and Letters of 1905 to 1913  2. Revelation and Philosophy in the Texts between 1913 and 1917 and in the Star of Redemption  3. The Question of Jewish and Human Essence in the Writings on Education and History  4. Faith in God and the Concept of God in the Comments on the Poems of Yehuda Ha-Levi  5. The Bible as Expression of the Heart in the Last Reflection  Part 4: Martin Buber (1878-1965)  1. The Refusal of Transcendence between 1900 and 1919  2. The Lyric-Dramatic Moment of Reality in I and Thou  3. The Analysis of Human Existence in Biblical Exegesis between 1926 and 1945  4. Education, Social Philosophy, Hasidic Studies between 1926 and 1945  5. The Problem of Evil in the Writings 1945-65  Part 5: Leo Strauss (1899-1973)  1. Subjectivism as a Characteristic of Modernity in the Book on Spinoza  2. The Research on the Grounds of Liberal Democracy between 1932 and 1936  3. The Rationalism of Medieval Jewish and Islamic Thought in Philosophy and Law  4. The Meditation on Natural Right between 1937 and 1966  5. The Antithesis 'Jerusalem'-'Athens', or Fidelity-Pride, in the Last Writings  Part 6: Emmanuel Levinas (1906-1995)  1. The First Contributions: Beyond Consciousness, Existence, and the Existent  2. The Other as Expression in Totality and Infinity  3. The Interpretation of Jewish Sources as Philosophical Analysis  4. The Other in the 'Self' in Otherwise than Being and in the Last Essays  Part 7: A Final Remark: Human Rights, the Truth of Witnessing, a Philosopher's Duty