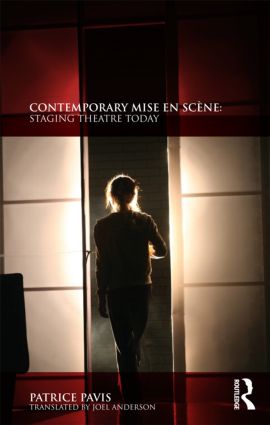 ‘We have good reason to be wary of mise en scène, but that is all the more reason to question this wariness … it seems that images from a performance come back to haunt us, as if to prolong and transform our experience as spectators, as if to force us to rethink the event, to return to our pleasure or our terror.’ – Patrice Pavis, from the foreword

Contemporary Mise en Scène is Patrice Pavis’s masterful analysis of the role that staging has played in the creation and practice of theatre throughout history. This stunningly ambitious study considers:

But it also applies sustained critical attention to the challenges of defining mise en scène, of tracking its development, and of exploring its possible futures. Joel Anderson’s powerful new translation lucidly realises Pavis’s investigation of the changing possibilities for stagecraft in the context of performance art, physical theatre and modern theory.

'The topic of this book formed the basis of a series of ten lectures given by Pavis at the University of Kent in 2005 whilst he was in residence as Leverhulme Visiting Professor. The lectures were insightful, comprehensive, entertaining and remarkably witty: words which well describe this extremely important book…Pavis has a truly remarkable ability to simultaneously describe, analyze and evaluate performance practice – at once the naïve audience member and the supreme analytical and critical theoretician…As this persistent and tireless lexicographer deconstructs, anatomizes and rebuilds various understandings and possibilities of mise en scène, the truly awe-inspiring range and breadth of the book is revealed. The possibilities of mise en scène emerge as the social, cultural and artistic energy behind making theatre and performance; in effect the phrase takes on the qualities of an active verb – ‘to theatre’. This analysis is undertaken with tremendous energy, enthusiasm and optimism, but also with a gentle humility that is constantly aware of the fundamental ephemerality and transience of theory.' Christopher Baugh, Studies in Theatre and Performance

"French theatre semiotician Patrice Pavis reminds us that despite its emergence from the histories of directing and scenography, mise en scène is “an abstract, theoretical notion, not a concrete and empirical one” (4), and it is worth revisiting its legacies in this postdramatic age." - Jeanmarie Higgins, Theatre Journal