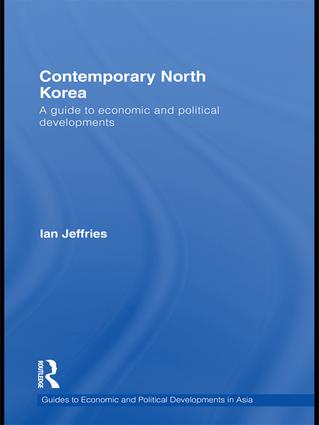 A guide to economic and political developments, 1st Edition

This book provides full details of contemporary economic and political developments in North Korea since late 2005, continuing the overview of developments which were covered in the author’s North Korea: A Guide to Economic and Political Developments (Routledge 2006). Key topics covered include: the succession; family visits; human rights; nuclear capability and intentions; recent initiatives in international relations, and relations with the United States; and adverse economic and social conditions.

Overall, the book demonstrates the degree to which North Korea’s international position is changing. This book provides a comprehensive overview of the current political and economic situation in North Korea today, and is an important resource for all those interested in this country’s recent development.

Praise for North Korea: A Guide to Economic and Political Developments (also published by Routledge):

"Jeffries’ ends his book in late 2005 … Jeffries' book is an invaluable resource to any scholar of North Korea’s political, diplomatic and economic development after the collapse of the Soviet Union. Although it does not attempt to provide answers as to why events occurred as they did, it will be an indispensable source for any attempt to do so." – Christopher Griffin, Pacific Affairs

Ian Jeffries is Honorary Professor in the Department of Economics at Swansea University. He is the author of other Guides to Economic and Political Developments in Vietnam, Mongolia and China, and co-author of A History of Eastern Europe (published by Routledge, now in its second edition).