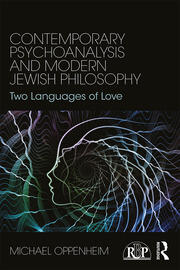 Relational psychoanalysis and modern Jewish philosophy have much to say about the dynamics of human relationships, but there has been no detailed, thorough, and constructive examination that brings together these two incisive discourses. Contemporary Psychoanalysis and Modern Jewish Philosophy: Two Languages of Love explores the critical similarities and differences between the two disciplines, casting new light on both the analytic and philosophical understandings of how relationships develop, flourish, and fail.

For psychoanalysts such as Hans Loewald, Stephen Mitchell, and Jessica Benjamin, love is seen as a fundamental life force, a key to human motivation, and the transformative core of Freud’s therapeutic "talking cure." The Jewish philosophers Franz Rosenzweig, Martin Buber, and Emmanuel Levinas envision love as having both a human and divine dimension, expressed through the dual commandments to love God and the neighbor. The two languages are brought to life through chapters that investigate: the relationship between self-love and love of the other, the dynamics of intersubjectivity, the methods and possibilities of human transformation, the "magical" powers of language, the goal of achieving a meaningful life, the significance of responsibility for others, and the challenge that death poses to life’s fullness.

This multidisciplinary study, drawing on psychology, philosophy, religion, and feminism, provides an important contribution to contemporary scientific and humanistic interest in the social and relational dimensions of human living. The book will appeal especially to clinicians, theorists, and scholars of psychoanalysis, philosophy of religion, and Jewish studies as well as advanced students studying in these fields.

1 Loving the Neighbor: On Self-Love

2 Jessica Benjamin and (the Missing) Martin Buber: On Intersubjectivity

3 The Presence of the Other: On Transformation

5 Revisiting an "Illusion": On Meaning

6 Beyond "Betrayal": On Responsibility

Michael Oppenheim is Professor Emeritus in the Department of Religion at Concordia University, Montreal. His books include Speaking/Writing of God (1997), Jewish Philosophy and Psychoanalysis (2006), and Encounters of Consequence (2009).

"Oppenheim has a unique ability to create dialogue between thinkers who exist on different planes and registers of meaning. In so doing, the reader is invited to listen to the stories we tell about "love", "relationship", "responsibility" and "death" in such a way that takes us far beyond their assumed, homogenized, and secularized forms. The dialogues that Oppenheim fosters allow us to speak about love more capaciously and with the dimension it deserves. Oppenheim’s sophisticated interdisciplinary scholarship is a model to be emulated."-David M. Goodman, Ph.D., Director, Psychology and the Other Institute

"Two Languages of Love deftly weaves together rich insights from Judaism and relational psychoanalysis. Each chapter demonstrates the fresh and original insights that emerge from the confluence of these traditions. When he turns to the subject of death, for instance, Oppenheim relies on both fields to forge a rich conversation about the authentic confrontation of mortality. Clinicians will find these moves innovative and immediately relevant. The author of this book is a teacher; readers of this volume are offered a compelling demonstration of the best in interdisciplinary scholarship."-Eric Severson, Seattle University

"Building on his previous publications, Oppenheim continues his path-breaking exploration of the interplay between modern Jewish philosophy and psychoanalysis. By generating an original and insightful dialogue between the Jewish philosophers Buber, Rosenzweig, and Levinas and the relational psychoanalysts, Hans Loewald, Stephen Mitchel, and Jessica Benjamin, among others, Oppenheim broadens the cultural significance of modern Jewish philosophy and enriches our understanding of recent developments in psychoanalysis. His interrogation of relationality and inter-subjectivity, of language’s role in meaning-making, of meaning and responsibility, and of trust and eternity creatively bridges philosophy, psychology, and religion."-Hava Tirosh-Samuelson, Arizona State University