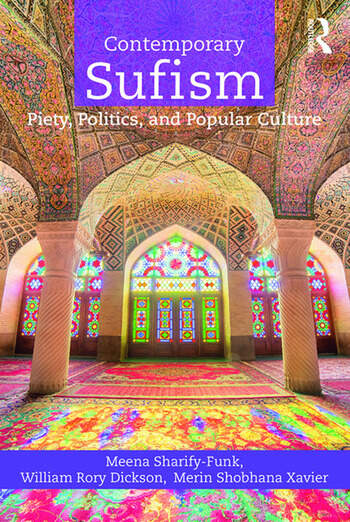 What is Sufism? Contemporary views vary tremendously, even among Sufis themselves. Contemporary Sufism: Piety, Politics, and Popular Culture brings to light the religious frameworks that shape the views of Sufism’s friends, adversaries, admirers, and detractors and, in the process, helps readers better understand the diversity of contemporary Sufism, the pressures and cultural openings to which it responds, and the many divergent opinions about contemporary Sufism’s relationship to Islam. The three main themes: piety, politics, and popular culture are explored in relation to the Islamic and Western contexts that shape them, as well as to the historical conditions that frame contemporary debates. This book is split into three parts:

• Sufism and anti-Sufism in contemporary contexts;

• Contemporary Sufism in the West: Poetic influences and popular manifestations;

This book will fascinate anyone interested in the challenges of contemporary Sufism as well as its relationship to Islam, gender, and the West. It offers an ideal starting point from which undergraduate and postgraduate students, teachers and lecturers can explore Sufism today.

The Structure of this Book

Part I: Sufism and Anti-Sufism in Contemporary Contexts

Chapter 1: Contextualizing the Production of Knowledge on Contemporary Sufism in the West

Orientalism and the Study of Sufism

From Text to Context: The Shift to Studying Living Sufism

Scholarship on Sufism Beyond the Academy

PART I: SUFISM AND ANTI-SUFISM IN CONTEMPORARY CONTEXTS

Chapter 2: Heart or Heresy? The Historical Debate Over Sufism’s Place in Islam

Early Islam and the Emergence of Sufism

The Sunni Synthesis: Sufism and Shari‘a

Ibn Taymiyya and the Medieval Roots of Modern Anti-Sufism

Ibn ‘Abd al-Wahhab and the Birth of Modern Anti-Sufism

Contrasting Hermeneutics of the Qur’an and Hadith

Pedagogy and the Transmission of Islamic Knowledge

The Spread of Anti-Sufism in the Twentieth Century

Chapter 4: Sufism in the Eyes of the West: Colonialists, Romantics, and Transcendentalists

Before Orientalism: Ramon Llull and Early Medieval Encounters with Sufism

Dervishes and Non-Muslims in Ottoman Turkey

The Travelogues of Lane and Brown

The Romantics and Sufism

The Poets of the East and the West: Hafiz and Goethe

The Concordians and the Sufis: Emerson, Whitman, and Hafiz

Chapter 5: The Era of Rumi: Contemporary Sufism and Popular Culture

The Making of the "Rumi Phenomenon" in America

Rumi as the Main Character: Novels, Comics, and Popular Literature

Sufism and the Arts: Music, Rumi Tours, and the Big Screen

Whirling with Rumi and Sufi Tourism

#RumiWasntWhite: Rumi on the Big Screen

Rumi: An Icon of LGBTQ Activism

Some Tea with your Rumi? Culinary Delights and Architectural Inspirations There is an App for That! Rumi on Social Media

Chapter 6: Perfecting the Self: Female Sufi Saints in Islamic History

: The Perfected Human Being

Age of Colonization: Sufi Females and the Call of Resistance

The Significance of Living Sufism: Transmission, Teachers and Role Models

Contemporary Female Sufi Leadership: Responsibilities and the Role of the Feminine

Conclusion: Discourses of Authenticity and Complementary Contradictions in Contemporary Sufism

Complementary Contradictions and the Making of Contemporary Sufism

Meena Sharify-Funk is Associate Professor and the Chair of the Religion and Culture Department at Wilfrid Laurier University, Canada.

William Rory Dickson is Assistant Professor of Islamic Religion and Culture at the University of Winnipeg, Canada.

is Assistant Professor in the Department of Philosophy and Religion at Ithaca College, USA.

"Contemporary Sufism examines both "God’s unruly friends", as well as the scholars who have studied, written about, interpreted, and theorized about them. This is a welcome addition to the literature on Sufism and its interpreters." Amir Hussain, Department of Theological Studies, Loyola Marymount University, USA

"Contemporary Sufism fills an enormous gap in the Islamic Studies literature. The analysis offered here is especially powerful because it reveals the many ways in which Sufi practices challenge the conventional wisdom about gender and religious authority in Islam. Essential reading for anyone looking to understand religion and society in the Muslim world today." Peter Mandaville, author of Islam and Politics, George Mason University, USA

"A commendable research work, this volume is enhanced by it’s comprehensible text, lucidity, text-title relevance, and rich notes at the end of each chapter. Contemporary Sufism: Piety, Politics, and Popular Culture is a must-read for students, researchers, and those with an expertise in religious studies, Islam, and Sufism and is highly recommended for the general readership as well." Mohammad Irfan Shah, Department of Islamic Studies at Aligarh Muslim University, Aligarh, India.