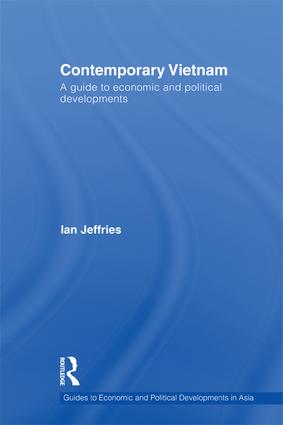 A Guide to Economic and Political Developments, 1st Edition

This book provides full details of contemporary economic and political developments in Vietnam. It continues the overview of developments up to late 2005 which were covered in the author’s Vietnam: A Guide to Economic and Political Developments (also published by Routledge, 2006). Key topics covered include Vietnam's success, in general, in maintaining high rates of growth in the face of problems such as inflation and the global financial crisis; continuing economic reforms; foreign trade and investment; battles against corruption; population growth; the determination of the Communist Party to maintain its hold on power; and Vietnam's response to public health problems such as AIDS, SARS and bird flu.

"The … book will help academics and general readers to get insights on contemporary Vietnam, an emerging economy of South East Asia". - PATRICIA ORDOÑEZ DE PABLOS, International Journal of Asian Business and Information Management

Ian Jeffries is Honorary Professor in the Department of Economics at Swansea University, UK. His recent publications include two volumes covering the Economic and Political Developments in Contemporary China, alongside many books in the Routledge series, Guides to Economic and Political Developments in Asia, covering China, North Korea and Mongolia.