Contentious Elections
From Ballots to Barricades 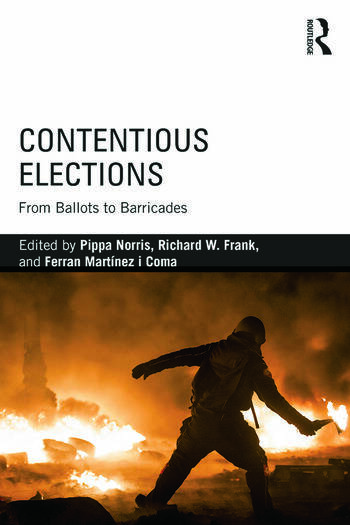 Contentious Elections: From Ballots to Barricades

From Afghanistan to Zimbabwe the world has witnessed a rising tide of contentious elections ending in heated partisan debates, court challenges, street protests, and legitimacy challenges. In some cases, disputes have been settled peacefully through legal appeals and electoral reforms. In the worst cases, however, disputes have triggered bloodshed or government downfalls and military coups. Contentious elections are characterized by major challenges, with different degrees of severity, to the legitimacy of electoral actors, procedures, or outcomes.

Despite growing concern, until recently little research has studied this phenomenon. The theory unfolded in this volume suggests that problems of electoral malpractice erode confidence in electoral authorities, spur peaceful protests demonstrating against the outcome, and, in the most severe cases, lead to outbreaks of conflict and violence. Understanding this process is of vital concern for domestic reformers and the international community, as well as attracting a growing new research agenda.

Pippa Norris is the McGuire Lecturer in Comparative Politics, John F. Kennedy School of Government at Harvard University, Laureate Research Fellow and Professor of Government and International Relations at the University of Sydney, and Director of the Electoral Integrity Project.

Ferran Martinez i Coma is a Research Associate in the Electoral Integrity Project at the University of Sydney.

"With more than half of the world’s countries claiming to be democratic, measuring the quality of democracy has never been more important. In this timely book, Norris, Frank and Martínez i Coma examine elections in which the result has been contested. Their findings are significant, and relevant to anyone who considers electoral integrity to be a core democratic value." —Ian McAllister, Australian National University, Australia.

"Contentious Elections is an important contribution to the burgeoning literature on election integrity, and a must-read for anyone interested in the dynamics of elections, protest and conflict. Bringing together a wide variety of empirical evidence from around the globe, Contentious Elections provides novel insights into the causal links connecting election integrity to legitimacy, electoral protests, and ultimately, election violence. The book argues that elections are neither universal peace-creators nor always spark war, but rather demonstrates that whether elections consolidate peace or trigger conflict depends on political, institutional and socio-economic conditions in which elections take place, providing important insights useful for researchers and policy-makers alike."— Carolien van Ham, University of New South Wales, UK.

"Elections can trigger challenges and protests, sometimes becoming violent, when outcomes are contested.  In this major new work, the implications of shortcomings in electoral integrity that provoke such challenges are examined in a broadly comparative framework by Norris and her colleagues. As the contributors to this volume demonstrate, contentious elections carry risks that need to be better understood by both scholars and practitioners. First rate, policy relevant, research on a fundamentally important topic."— Lawrence LeDuc, University of Toronto, Canada.