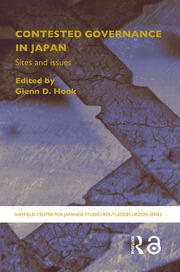 Glenn Hook is Director of the Graduate School of East Asian Studies and Professor of Japanese Studies at the University of Sheffield, UK.

'Hook provides a very worthwhile, carefully-constructed and readable introduction to the major themes in both sections and draws the readers attention to the links between the wide-ranging offerings. The writing throughout is clear and concise and jargon is kept to a minimum. The overall result is a densely packed but deeply satisfying book that repays careful reading.' - Asian Studies, Nov 2006