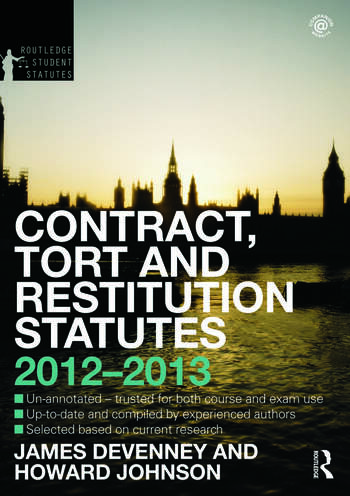 ‘Focused content, layout and price - Routledge competes and wins in relation to all of these factors’ - Craig Lind, University of Sussex, UK

Routledge Student Statutes are:
• Exam Friendly: un-annotated and conforming to exam regulations
• Tailored to fit your course: 80% of lecturers we surveyed agree that Routledge Student Statutes match their course and cover the relevant legislation
• Trustworthy: Routledge Student Statutes are compiled by subject experts, updated annually and have been developed to meet student needs through extensive market research
• Easy to use: a clear text design, comprehensive table of contents, multiple indexes and highlighted amendments to the law make these books the most student-friendly Statutes on the market    Competitively Priced: Routledge Student Statutes offer content and usability rated as good or better than our major competitor, but at a more competitive price
• Supported by a Companion Website: presenting scenario questions for interpreting Statutes, annotated web links, and multiple-choice questions, these resources are designed to help students to be confident and prepared.

James Devenney is Chair in Commercial Law at the University of Exeter.  Howard Johnson is Deputy Head of Bangor Law School and Senior Lecturer in Law at Bangor University.