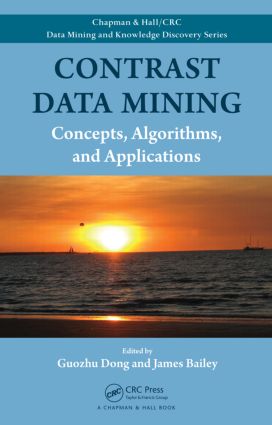 Contrast Data Mining: Concepts, Algorithms, and Applications collects recent results from this specialized area of data mining that have previously been scattered in the literature, making them more accessible to researchers and developers in data mining and other fields. The book not only presents concepts and techniques for contrast data mining, but also explores the use of contrast mining to solve challenging problems in various scientific, medical, and business domains.

This book, edited by two leading researchers on contrast mining, Professors Guozhu Dong and James Bailey, and contributed to by over 40 data mining researchers and application scientists, is a comprehensive and authoritative treatment of this research theme. It presents a systematic introduction and a thorough overview of the state of the art for contrast data mining, including concepts, methodologies, algorithms, and applications. … the book will appeal to a wide range of readers, including data mining researchers and developers who want to be informed about recent progress in this exciting and fruitful area of research, scientific researchers who seek to find new tools to solve challenging problems in their own research domains, and graduate students who want to be inspired on problem solving techniques and who want to get help with identifying and solving novel data mining research problems in various domains.

—From the Foreword by Jiawei Han, University of Illinois, Urbana-Champaign, USA

Contrast Mining for Classification and Clustering

Survey of Other Papers

Overview of Results on Contrast Mining and Applications, Guozhu Dong

Guozhu Dong is a professor at Wright State University. A senior member of the IEEE and ACM, Dr. Dong holds four U.S. patents and has authored over 130 articles on databases, data mining, and bioinformatics; co-authored Sequence Data Mining; and co-edited Contrast Data Mining and Applications. His research focuses on contrast/emerging pattern mining and applications as well as first-order incremental view maintenance. He has a PhD in computer science from the University of Southern California.

James Bailey is an Australian Research Council Future Fellow in the Department of Computing and Information Systems at the University of Melbourne. Dr. Bailey has authored over 100 articles and is an associate editor of IEEE Transactions on Knowledge and Data Engineering and Knowledge and Information Systems: An International Journal. His research focuses on fundamental topics in data mining and machine learning, such as contrast pattern mining and data clustering, as well as application aspects in areas, including health informatics and bioinformatics. He has a PhD in computer science from the University of Melbourne.