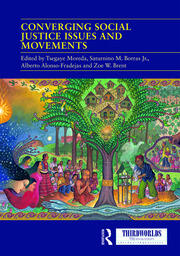 This shift affects alliances, collaboration and conflict among and between state and social forces, as well as within and between social movements. The actual implications and mechanisms by which these changes are happening are, to a large extent, empirical questions that need careful investigation. The majority of the discussions in this volume are dedicated to the issue of responses to the crises both by capitalist forces and those adversely affected by the crises, and the implications of these for academic research and political activist work.

Interdisciplinary in nature, Converging Social Justice Issues and Movements will be of great use to scholars of agrarian politics, as well as climate and environmental justice studies. The chapters were originally published as a special issue in Third World Quarterly.

2. The politics of convergence in Bolivia: social movements and the state

5. The challenge of locating land-based climate change mitigation and adaptation politics within a social justice perspective: towards an idea of agrarian climate justice

6. The right to food in the context of large-scale land investment in Ethiopia

7. Analysing agricultural investment from the realities of small-scale food providers: grounding the debates

8. The ‘tenure guidelines’ as a tool for democratising land and resource control in Latin America

9. Why wait for the state? Using the CFS Tenure Guidelines to recalibrate political-legal struggles for democratic land control

10. Pathway to resilience: hands and hearts for peasant livelihoods and fair relations between humans and nature

11. The origins and politics, campaigns and demands by the international fisher peoples’ movement: an Indigenous perspective

Tsegaye Moreda is assistant professor of critical agrarian studies at the International Institute of Social Studies (ISS) in The Hague, and a founding member of the Young African Researchers in Agriculture (YARA) network based at the University of the Western Cape, South Africa.

Saturnino M. Borras Jr. is professor of agrarian studies at the International Institute of Social Studies, an adjunct professor of the College of Humanities and Development Studies (COHD) at China Agriculture University in Beijing, and a fellow of the Amsterdam-based Transnational Institute (TNI). His latest book is Political Dynamics of Transnational Agrarian Movements (2016, with Marc Edelman).

Alberto Alonso-Fradejas is a lecturer in international development studies at the Human Geography & Spatial Planning Department of the Faculty of Geosciences at Utrecht University, the Netherlands. He is also an associate researcher at the Transnational Institute (TNI) in Amsterdam, a fellow of the Guatemalan Institute of Agrarian and Rural Studies (IDEAR), and Reviews Section co-editor of the Journal of Peasant Studies.

Zoe W. Brent is a PhD candidate carrying out a joint doctorate at the International Institute of Social Studies (ISS) in the Netherlands and the University of Cordoba in Spain. She is also part of the Agrarian and Environmental Justice team at the Transnational Institute (TNI) in Amsterdam.