Converging Worlds
Communities and Cultures in Colonial America, A Sourcebook 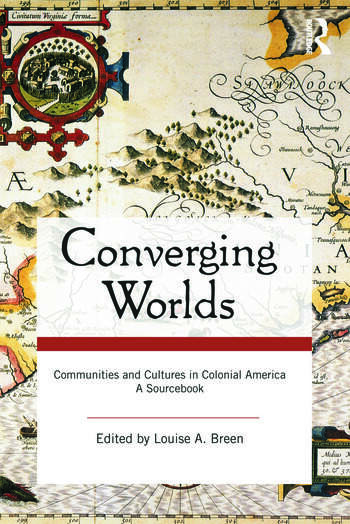 Converging Worlds: Communities and Cultures in Colonial America, A Sourcebook

Providing a survey of colonial American history both regionally broad and "Atlantic" in coverage, Converging Worlds presents the most recent research in an accessible manner for undergraduate students.

The ideal accompaniment to Converging Worlds: Communities and Cultures in Colonial America, this Sourcebook is a collection of primary documents that contextualize and bring to life the exciting narrative of early America. The expert authors of each chapter have hand-picked multiple documents corresponding with the same chapter in the textbook to help students delve deeper into the diverse geographic regions and variety of topics covered in this time period, including:

In addition to the helpful maps, timelines, and further resources available for students on the companion site, instructors will have access to the full text of many of the documents included in the Sourcebook.

Document 1: Spain and Portugal divide the world at the Treaty of Tordesillas, 1494

Document 2: The Spanish way of announcing their intention to take control, 1512

Document 5: The States General of the Netherlands establishes the Dutch West India Company, 1621

Document 4: Florentine Codex account of the Massacre at Cholula

Document 1: Thomas Harriot reports on the native people at Roanoke, 1588

Document 3: William Bradford comments on an epidemic among native peoples of New England, 1634

Document 2: An Englishman writes the Virginia Company with news of Jamestown, 1620

Document 3: Charles I takes the Governor and Council of Virginia to task, 1637

Document 4: Virginians complain about the founding of Maryland and the actions of their governor, 1635

Document 2: A minister warns against the dangers of religious toleration, 1647

Document 5: An English war captive recalls her suffering and the workings of providence during King Philip’s War, 1682

Document 6: The Massachusetts General Court legislates against the immoral behaviors thought to have "provoked" God to allow New Englanders to suffer Indian violence, 1675

Document 7: An Englishman voices sympathy for the suffering of Indians during King Philip’s War, 1677

Document 2: A ship master complains of being robbed by Spanish sloops, 1730

Document 3: A patriot planter from Georgia advises his son to leave Jamaica, 1776

Document 4: The governor of Jamaica sympathizes with the plight of his counterpart in Virginia, 1776

Document 1 The Half Moon crew explores the future New Netherland while seeking a route to Asia, 1609

Document 3: The Mohawk Iroquois and representatives from the Chesapeake engage in diplomacy under the Covenant Chain, 1677-79

Document 1: An Anglican missionary proclaims the evils of the Albemarle during Cary’s Rebellion, 1711

Document 3: A Boston sea captain and merchant remembers being accused as a witch, 1700

Document 2: Jesuit missionary Paul LeJeune writes of the hardships of life with the Montagnais, mid 1630s

Document 1: A former slave ship surgeon reveals the horrors of the Middle Passage

Document 2: An English traveler comments on the rape of a slave in Massachusetts, 1638

Document 2: A Marblehead fisherman describes how a crowd of women killed his two Indian prisoners, 1677

Document 3: An African woman, "prophetess," and freedom fighter in Jamaica, 1732

Document 4: A slave woman pleads with the Archbishop of Canterbury for religious liberty and protests her sale to the West Indies, 1760

Document 5: Georgia’s founder extols the importance of women in ensuring order and productivity during a time of chaos and war, 1742

Document 6: A war captive from Pennsylvania recalls how she made a new life among the Indians

Document 4: An English traveler presents an idyllic view of the Shenandoah Valley, 1759-60

Document 6: The "Paxton Boys" defend their actions and express their frustrations, 1764

Document 7: An Englishman travels the backcountry, 1774

Document 2: George Whitefield proclaims the necessity of the New Birth, 1737

Document 7: An account of the first sighting of the Virgin of Guadalupe

Document 1: Women correspond in efforts to help one another "improve"

Document 2: Benjamin Franklin networks and experiments with a secular way of inculcating virtue

Document 3: A Virginia planter expounded on the characteristics of native peoples and Africans

Document 1: A Jesuit explains the "Polity of the Hurons, and Their Government," 1636

Document 4 A French officer reflects on the direction of the war, 1758

Louise A. Breen is Associate Professor of History at Kansas State University. She is the author of Transgressing the Bounds: Subversive Enterprises among the Puritan Elite in Massachusetts, 1630-1692.