Corporate Governance and Effectiveness
Why Companies Win or Lose 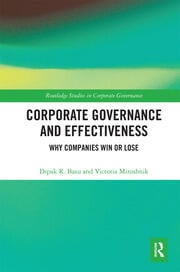 Corporate Governance and Effectiveness: Why Companies Win or Lose

The book looks at the corporate management system and how it affects company performance. The main theme revolves around the notion that when a company values its workers and their satisfaction, that company can achieve success. The book is unique in its quantitative perspective and analysis and examines whether a corporate management system can be regarded as a source of a firm's competitive advantage by creating a sustainable competitive advantage and firm performance. The book examines how, in the context of Japanese multinational corporations (MNCs), corporate management can be part of an MNC's strategy in enhancing its capabilities, both in the home and abroad, in Japan and in Thailand. Also, it analyses the reason for the demise of two major Indian companies, Dunlop and Hindustan Motors in terms of their unsympathetic management systems.

Victoria Miroshnik is Professor of Management at Reitaku University, Japan.

'Japanese management technique is normally ignored in the West but it is related to a critical analysis of Karl Marx presented in the 19th century. The main thesis is that if the managers do not consult the workers and do not recognize their human dignity, the workers get alienated and cannot perform. In the film Modern Times of Charlie Chapin, that problem was described in a funny way. In the Japanese management system, this issue was taken very seriously and one of the criteria of corporate efficiency is the satisfaction of the workers. This book has taken the task of the analysis of the Japanese management system and their success in the major Japanese automobile companies in terms of close relationship between the person and the organization in that management system.

This book has tried to explain the success of the major Japanese companies in terms of this humanitarian management system, where the workers are respected and appreciated rather than to be treated as disposable as it is in the Anglo-American profit-oriented management system.' — Alexis Lazaridis, Professor of Econometrics, Aristotle University of Thessaloniki, Greece

'This is going to be a highly interesting and provocative book on management system and operations behaviour. The book focuses on the humanistic approach of industrial relations and explain how a corporate governance system can create it. It also emphasises on the importance of the Japanese system of management, about which the world knows practically very little. If the Japanese system of management can create a humanistic management, that would be a fantastic news for the Marxists and non-Marxists alike. I hope managers and students would find the book very useful.' — Ivan Hevsuriani, Professor in Mathematical Systems, Institute of Aeronautical Engineering, Moscow

'This book is about corporate governance and how it affects the performance of companies across the globe. The authors have considered a number of cases in Japan, Thailand and India, and Japanese companies in Britain. It is the result of many years of surveys, interviews, and analysis in many different organizations in all of these countries. A conclusion of the authors is that the alienation of the workers has very serious effects on the performance of the business firms. One of the main objectives of the Japanese companies is to reduce conflict and to create harmony in workplaces. It is a very difficult task and requires an appropriate organizational culture, but those who are successful tend to win and those who neglect this aspect of corporate governance do not achieve much success. As the Japanese management system is yet to be accepted in the western world this provocative conclusion will hopefully create a strong debate in the management literature. On the whole, the book is highly interesting and stimulating, especially for researchers in management, management organisation and management science.'