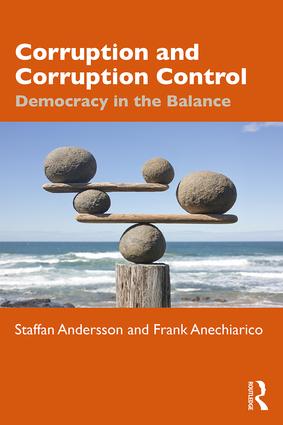 Democracy in the Balance, 1st Edition

Corruption in politics and public administration is pervasive and difficult to eliminate. It has a strong effect on public attitudes toward government and is at the same time badly understood. A clear, comprehensive understanding of corruption is critical to the goal of ethical government that is trusted by the public.

In this short and accessible text, Staffan Andersson and Frank Anechiarico demonstrate how the dynamics of life in organizations both generate corruption and make it difficult to prevent without undermining the effectiveness of government. They argue that how we define corruption, how we measure it, and how we try to combat it are strongly interrelated and should not be seen as separate issues. The authors demonstrate how this integrated approach, together with a focus on the damage caused by corruption to civic inclusivity and participation, can serve as an entry point for understanding the quality of democracy and the challenge of good governance.

Using examples from mainly the United States and Sweden, Andersson and Anechiarico establish that recent anti-corruption reforms in public administration have often been narrowly focused on bribery (exchange corruption) and law enforcement approaches, while doing too little to other problems and forms of corruption, such as interest conflict.

Corruption and Corruption Control: Democracy in the Balance will be of great interest to all students of politics, public administration and management, and ethics.

"After three decades of anti-corruption activism that has produced only modest results, it is time to reassess key aspects of reform thinking. Andersson and Anechiarico launch that process by distinguishing between exchange and governance corruption, identifying causes and consequences of those problems, and spelling out political and institutional challenges of reform in a realistic yet positive fashion. In the process they identify core dynamics of corruption that are visible in a variety of settings, and show how lasting reform requires not just punishing misconduct but rather building better relationships between state and society."—Michael Johnston, Charles A. Dana Professor of Political Science, Emeritus, Colgate University

"Distinguishing 'governance corruption' from 'exchange corruption' makes a new, important and stimulating contribution to scholarship about corruption and policy making directed at corruption control. A valuable book that is a must read for corruption scholars highly accessible for students. Bravo."—James B. Jacobs, Chief Justice Warren E. Burger Professor of Law, New York University

"The authors have created something extraordinary: a popular book on corruption! Engaging and accessible content from an international perspective, with original case studies sure to spark discussion, this is a book for students of corruption at every level. The contemporary focus and broad overview make this an on-point and dynamic learning resource."—Carole L. Jurkiewicz, Ph.D., University of Colorado, Colorado Springs

"Andersson and Anechiarico's Corruption and Corruption Control represents a major achievement not only in the literature on corruption but in the study of political cultures more generally. Their democratic approach is laudable in itself but it also drives home the need for vigilance against the ideas that corruption is always simple graft and that cultural and ethical dysfunctions can be solved through coercive force alone."—Dr. Ciarán O'Kelly, Queen's University Belfast

2. What Corruption was, is, and is not

3. Can We Know How Much Corruption There Is? On the Measurement of Corruption

6. Is Corruption Inevitable? Can it be Controlled?

7. The Future of Public Integrity

Staffan Andersson is Associate Professor of Political Science at Linnaeus University, Sweden. His research and teaching focus on public administration and comparative politics. Andersson has published widely on issues of risk vulnerability in public organizations and the measurement of corruption in journals including Political Studies and Public Integrity. He was the principal investigator for the National Integrity System Assessment of Sweden (2012).

Frank Anechiarico is the Maynard-Knox Professor of Government and Law at Hamilton College. He is editor and co-author of Legal but Corrupt: A New Perspective on Public Ethics, co-author with James Jacobs of The Pursuit of Absolute Integrity: How Corruption Control Makes Government Ineffective, and author of articles in Public Administration Review, Urban Affairs Quarterly, Administration and Society, and other journals.