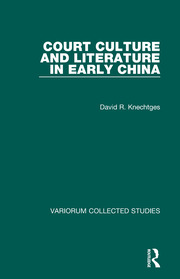 The studies brought together here focus upon the literary and cultural activity of the Chinese court during the Han and early medieval period. The first section concerns court literature in the Former Han and deals with the role of literature, especially poetry, at both the imperial and princely courts, including one study of the writings attributed to an imperial concubine, who used poetry to express her resentment at falling from the emperor’s favour. The next section looks at a leading court writer of the Late Western Han dynasty, Yang Xiong, while the third part deals with the leading poetic genre of this period, the fu or rhapsody. These papers examine major themes such as praise, travel, dating and authenticity, and problems of translation. The volume concludes with two articles on food culture in early and medieval China.

Contents: Preface; Court Literature in the Former Han: Ssu-ma Hsiang-ju's Tall Gate Palace Rhapsody; The emperor and literature: Emperor Wu of the Han; The fu in the Xijing zaji; The poetry of an imperial concubine: the Favorite Beauty Ban; Yang Xiong, A Court Poet of the Late Western Han: Narration, description, and rhetoric in Yang Shyong's Yeu-lieh fuh: an essay in form and function in the Hann fuh; Uncovering the sauce jar: a literary interpretation of Yang Hsiung's ChÃ¼ Ch'in mei Hsin; The Liu Hsin/Yang Hsiung correspondence on the Fang yen; Themes and Problems in Fu Studies: Problems of translating descriptive binomes in the Fu; Poetic travelogue in the Han fu; To praise the Han: the eastern capital fu of Pan Ku and his contemporaries; A journey to morality: Chang Heng's The Rhapsody on Pondering the Mystery; Pao Chao's Rhapsody on the ruined city: date and circumstances of composition; Food and Literature: A literary feast: food in early Chinese literature; Gradually entering the realm of delight: food and drink in early medieval Chinese literature; Index.