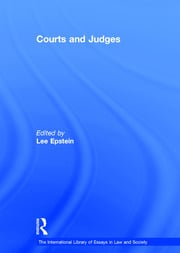 Scores of works have made important contributions to the study of courts and judges but far fewer are sufficiently powerful to alter perspectives about entire areas of study. The articles in this volume do just that. They are, to be sure, a rather diverse set covering four substantive concerns - judicial selection and retention, judicial decision making, constraints on judicial power and the role of courts in democracies - but all have played crucial roles in shaping or changing the way we think about courts and judges.