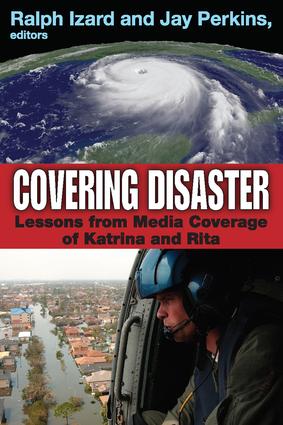 Lessons from Media Coverage of Katrina and Rita, 1st Edition

In 2005, journalists faced enormous challenges while covering hurricanes Katrina and Rita along America's Gulf Coast. They struggled to find ways to communicate, move from one place to another, and find reputable information. They witnessed complete chaos, observed human suffering, and were outraged with delayed or ineffective rescue mechanisms. Not only did journalists face these normal problems of crises, since many themselves were among the victims, they were forced to do their jobs under circumstances that seemed impossible.

The contributors to Covering Disaster study personal and professional coping mechanisms and lessons that may be learned from media disaster coverage. During Katrina and Rita, journalists responded largely by redefining traditional ideals of fairness, balance, and objectivity and by adopting an emotionally driven and somewhat more subjective reporting style. In this way, they rediscovered and emphasized journalistic purposes and techniques that have long been the hallmarks of greatness. Their work during those months of destruction and pain was applauded by their readers and viewers because it was useful, critical of officials who were not doing their jobs, sought support for those who were suffering, and took a position of public leadership.

Now that the winds have died down, flood waters have receded, and rebuilding has begun, the brand of publicoriented journalism found in the midst of the storms must not be forgotten.