Credit and Creed
A Critical Legal Theory of Money 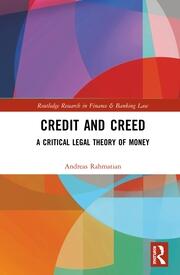 Credit and Creed: A Critical Legal Theory of Money

Money is a legal institution with principal economic and sociological consequences. Money is a debt, because that is how it is conceptualised and comes into existence: as circulating credit – if viewed from the creditor’s perspective – or, from the debtor’s viewpoint, as debt. This book presents a legal theory of money, based on the concept of dematerialised property. It describes the money creation or money supply process for cash and for bank money, and looks at modern forms of money, such as cryptocurrencies. It also shows why mainstream economics presupposes, but avoids an analysis of, money by effectively eliminating money from the microeconomic market model and declaring it as merely a neutral medium of exchange and unit of account. The book explains that money rather brings about and influences substantially the exchange or transaction it is supposed to facilitate only as a neutral medium. As the most liquid of all assets, money enables financialisation, monetisation and commodification in the economy. The central role of the banks in the money creation process and in the economy, and their strengthened position after the bank rescue measures in the wake of the financial crisis 2008-9 are also discussed.

Providing a rigorous analysis of the most salient legal issues regarding money, this book will appeal to legal theorists, economists and anyone working in commercial or banking law.

I. The Legal Concept of Money

1. Money as a legal concept of property as opposed to an economic concept of a medium of exchange

a) The disappearance of money from law

b) The current definition of money by economists

2. The legal conceptions of ‘property’ and ‘dematerialised property’

a) The legal conception of dematerialised property in general

(i) Meaning of the term ‘property’

b) Specific applications of the concept of dematerialised property: company shares and debts (including debts formalised in writing)

b) Definitions of forms of money

(vi) Definitions of money by the English courts

(vii) The limited use of money definitions by economists

a) Money as dematerialised property

b) Expectation, not entitlement through money

5. The concept of money as dematerialised property and the judicial reality

II. The Creation of Money and its Legal Basis

a) Financial intermediation theory of money

b) Fractional reserve theory of money

2. The creation of money by central banks

3. The creation of money by commercial banks

a) The creation of bank money in the banks’ accounts

b) The problem of money creation ‘out of nothing’: the banks’ privilege of not being required to hold clients’ accounts

c) The practical relevance of the fractional reserve system

4. The enforcement of the debt that money constitutes: legal enforcement makes the res to money. The janiform nature of the money-debt res

5. The problem of interest

6. The legal basis for the creation of money by central and commercial banks

a) The normative text of money and the presumed legal sources

b) Examples: UK and Germany

III. Money as a Static Concept: Money in Economics

1. The (non)recognition of money by economists in microeconomics

b) Just price and market price

(i) The price in sale and ‘barter’

(ii) Historical-philosophical and religious ideas of the ‘just price’

2. The suppression of money in classical economics and from neo-classical market equilibrium concepts

a) The Classical School of economics: polemic suppression of the relevance of money for capital formation

4. The relevant elements of the monetarist approach in economics for a legal theory of money, and for a critique

5. Some critical points by ‘heterodox’ economists; the spurious historical basis of the ‘barter’ narrative for the introduction of money

6. Conclusion: The disregard of time, and consequently money, in the static market conception of microeconomics

IV. A Dynamic Concept of Money. The Alienation Cycle

1. The time-bound nature of money

2. The framework of relations that money designs: the four cases or aspects of money

3. The quasi-alchemistic transformation of assets by money

b) An outline of the philosophical concepts of alchemy

c) Ideas of alchemy in the modern system of money

4. The alienation cycle I: The externalisation or transfer cycle

a) Externalisation or transfer through money: the model of the transfer cycle

b) The transfer cycle in practice

V. The Legal Underpinnings for the Functioning of Money as Money: The Faith in Money and the Power of the Banks

1. Money as a legally enforced creed

2. The genuine transfer of value through enforcement of money and debt

3. The idea of the ‘strong debtor’ and the ‘weak creditor’ and the relevance of the corporate structure of banks

4. Strengthening the power of banks by the European Stability Mechanism (ESM)

Andreas Rahmatian is Professor of Commercial Law at the University of Glasgow. His research interests are in intellectual property and commercial law, property theory, comparative law and legal theory, and intellectual history and the law.