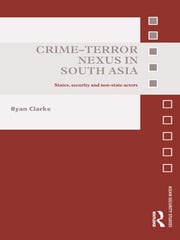 This book examines the crime-terror nexus in South Asia, focusing in particular on the activities of non-state actors that operate out of Pakistan, and challenges the conventional wisdom that the Pakistan Taleban (TTP) and Al-Qaeda are Pakistan’s most serious security threats.

Much research has focused on the policies of India and Pakistan towards Kashmir. But surprisingly little attention has been paid to several notable Pakistan-based non-state actors who are increasingly operating on their own, and who have the potential to greatly inhibit, if not derail, the peace process there. These groups blur the line between terrorism and organized crime with serious implications for policy in the region. India and Pakistan can engage in confidence-building measures, but if criminal actors such as Lashkar-i-Taiba (LeT) and D-Company cannot effectively be controlled, a lack of trust between both sides will remain.

Although the role of regular military forces is not to be discounted, many of the non-state actors in Indian-Held Kashmir, such as LeT, are not confined by the same restraints as state forces, thus allowing them engage in more violent actions without fear of reprisal. In order for lawmakers, security personnel, and others to develop sound, comprehensive policies, these forces and their potential to undermine political initiatives must be fully appreciated. This book explores the dynamics of the relationship between Pakistan, D-Company, and LeT and how it affects strategic thought, decision-making, and security interests in the region and explains the triangular relationships between states, terrorist groups, and organized criminal syndicates in general, and in India and Pakistan in particular.

This book will of much interest to students of South Asian politics, terrorism, organised crime, war and conflict studies, and Security Studies in general.

Introduction  1. Analysis of Current Research  2. Misgovernance and Proxy Warfare in Kashmir: Laying the Groundwork for the Crime-Terror Nexus  3. The Crime-Terror Nexus and Chinese Arms in Indian-Held Kashmir  4. Lashkar-i-Taiba: The Fallacy of Subservient Proxies and the Future of Islamist Terrorism in India  5. LeT and D-Company in Pakistan – Selective Justice, Sectarianism, and Artificial Distinctions  6. Breakdown of Order in FATA: Driven by the Pakistani Taliban and Al-Qaeda but Ideologically Underwritten by LeT  7. The Pakistani Economy – Imbalances and Contradictions, Incomplete Islamization, and D-Company as a Strategic Asset

Ryan Clarke is at the East Asian Institute, National University of Singapore and has a PhD in Politics and International Relations from Cambridge University.