Crime, Violence and the State in Latin America 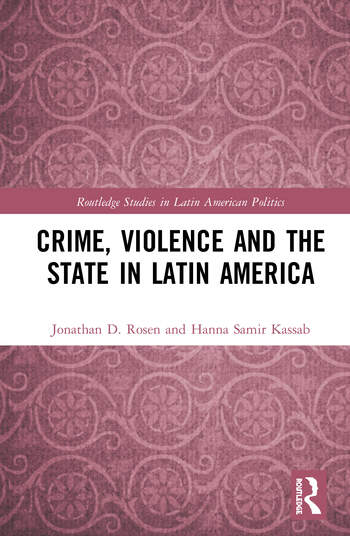 Crime, Violence and the State in Latin America

Using quantitative analysis to examine criminal violence and publicly available survey data from The Latin American Public Opinion Project (LAPOP) to conduct regression analysis, individual case studies on Colombia, Mexico, El Salvador, and Nicaragua highlight the major challenges that governments face and how they have responded to various security issues. Rosen and Kassab later turn their attention to the role of external criminal actors in the region and offer policy recommendations, and lessons learned. Questions explored include:

• What are the major trends in organized crime in this country?

• How has organized crime evolved over time?

• Who are the major criminal actors?

• How has state fragility contributed to organized crime and violence (and vice versa)?

• What has been the government’s response to drug trafficking and organized crime?

• Have such policies contributed to violence?

"Rosen and Kasaab’s Crime, Violence, and the State in Latin America is essential reading for anyone who wants to understand how criminal organizations flourish in the power vacuums present in fragile states. Beyond merely illustrating how corruption impedes development in individual states, the authors demonstrate how the spread of illicit networks threaten regional security as well. It’s a cogent, timely study that will benefit practitioners and undergraduates alike" — Christine J. Wade, Professor of Political Science and International Studies at Washington College

"Rosen and Kassab prove again they are the go to authors when it comes to understanding the connections between organized crime, illicit markets, violence and weak states. Crime, Violence, and the State in Latin America represents another masterful treatise on the salient issues that shape the developing world today. Rosen and Kassab link power, organized crime and weak institutions into a sophisticated and methodologically rigorous framework that explains the mechanism by which illicit non-state actors challenge state authority. Through well researched case studies Rosen and Kassab help to further our understanding of the consequences that crime and violence have on institutionalization and democratization in the developing world. This volume is a must read for anyone interested in the intersection of crime, violence and the development of state power." — Orlando J. Pérez, Dean of the School of Liberal Arts and Sciences and Professor of Political Science, University of North Texas at Dallas