Crime and Punishment in Britain
The Penal System in Theory, Law, and Practice 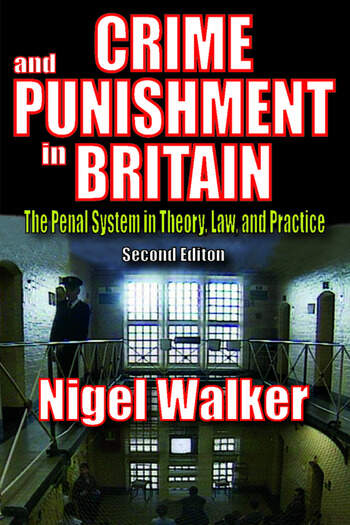 Crime and Punishment in Britain: The Penal System in Theory, Law, and Practice

This book, first published in 1965, describes the British penal system as it existed in the 1960s. It describes how the system defined, accounted for, and disposed of offenders. As an early work in criminology, it focuses on differences between, and changes in, the views held by legislators, lawyers, philosophers, and the man in the street on the topic of crime and punishment. Walker is interested in the extent to which their views reflect the facts established and the theories propounded by psychologists, anthropologists, and sociologists.

The machinery of justice involves the interaction of human beings in their roles of victim, offender, policeman, judge, supervisor, or custodian, and there must be a place for human sympathy in the understanding, and still more in the treatment, of individual offenders. This book is concerned with the efficiency of the system as a means to these ends. One of the main reasons why penal institutions have continued to develop more slowly than other social services is that they are a constant battlefield between emotions and prejudices. This is a great empirical study; against which the policy-maker and criminologist can measure progress or regression in British criminals and punishments.

Part One: Introduction
1: The scope and accuracy of the penal system
2: Trends and patterns in crime

Part Four: Sentencing
11: The sentencing process
12: The efficacy of sentences

16: Influences on the Penal System