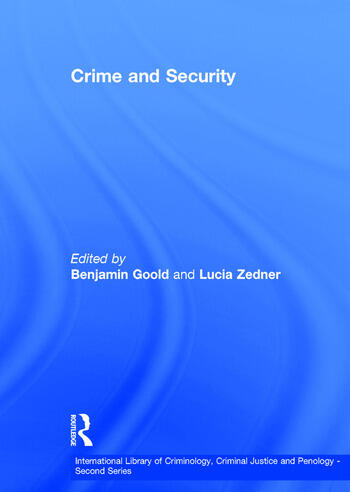 The pursuit of security is now central to the development of public policy and a driving force behind the spread of private policing. Just as new theoretical frameworks are needed to deal with the increasing tendency of crime control policies to focus on risk reduction, new forms of governance are also required to deal with the rapid growth of the private security industry. This volume brings together a wide range of contributions from leading scholars in the field and includes international and comparative perspectives on the challenges posed by the rise of the 'security society'.

Benjamin Goold is a University Lecturer in Law and a Fellow and Tutor at Somerville College, University of Oxford. His major research interests are in the use of surveillance technology by the police, and the relationship between individual privacy rights and the criminal law. He also writes on aspects of the Japanese criminal justice system, and is a member of the Faculty of Oriental Studies and an Associate Member of the Nissan Institute of Japanese Studies. Lucia Zedner is Professor of Criminal Justice, Law Fellow at Corpus Christi College, and a Member of the Centre for Criminology in the Faculty of Law, University of Oxford. Her research interests include criminology and criminal justice, especially penal theory and comparative criminal justice. She has written extensively on the subject of security, anti-terrorism policy, community safety, and the private security industry.