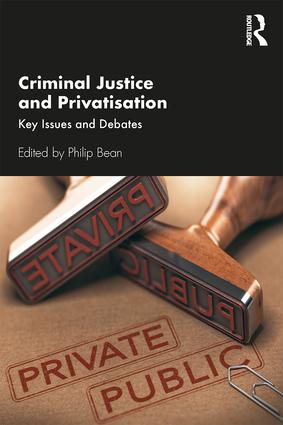 works to examine the impact of privatisation on the criminal justice system, and to explore the potential effects of privatising other areas including the police and the security industry. By including chapters from practitioners and academics alike, the book offers an expansive overview of the criminal justice system, as well as observations of the effect of privatisation at ground level. By also exploring the way the private companies are paid, how they operate and what private companies do, this book offers an insight into and the future of privatisation within the public sector.

Written in a clear and direct style this book will appeal to students and scholars in criminology, sociology, cultural studies, social theory and those interested in learning about the effects of privatisation.

Philip Bean was formerly a probation officer in the Inner London Probation and After Care Service (until 1970) before taking up appointments for the Medical Research Council. He is now Emeritus Professor of Criminology and Criminal Justice at the University of Loughborough. He is the Author/Editor of over 30 books and of numerous papers in learned journals mainly on Mental Disorder and Crime and Drugs and Crime, but also on other matters in Criminology namely Criminological Theory.