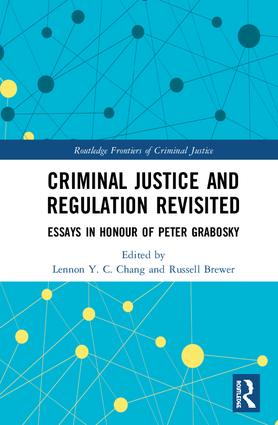 This volume brings together leading researchers to celebrate the significant contributions of Peter Grabosky to the field of Criminology, and in particular his work developing and adapting regulatory theory to the study of policing and security.

Over the past three decades, his path-breaking theoretical and empirical research has contributed to a burgeoning literature on the myriad ways regulatory systems drive state and non-state interactions in an effort to control crime. This collection of essays showcases Grabosky’s pioneering treatment of key regulatory concepts as they relate to such interactions, and illustrate how his work has been instrumental in shaping contemporary scholarship and practice around the governance of security.

Revisiting the work of a key figure in the field, this book will be of interest to criminologists, sociologists, socio-legal studies and those engaged with security and policy studies.

Preface: The light on the hill (John Braithwaite)

2. Regulation beyond the state: The role of non-state actors (Lorraine Cherney and Adrian Cherney)

Part 3: Second and third parties as sponsors of regulatory activity

6. Non-state actors as brokers of crime control: Accounting for entrepreneurialism on the waterfront (Russell Brewer)

Dr Lennon Y.C. Chang is a Senior Lecturer in Criminology in the School of Social Sciences at Monash University. He was previously Assistant Professor in the Department of Applied Social Studies at City University of Hong Kong. He is a founding member and Vice Chairman of the Asia Pacific Association of Technology and Society. He was an Endeavour Asia Award recipient, an Australia-China Emerging Leader, a Global Emerging Voices Fellow and an Australia-China Youth Dialogue Fellow. Dr Chang researches crime and governance of cyberspace - cybercrime, cyber terrorism and cyber warfare, particularly in the greater China region. He is currently researching internet vigilantism as well as cybercrime and cyber-deviance among juveniles in the Asia-pacific region. Dr Chang received his PhD from the Regulatory Institutions Network at the Australian National University, under the supervision of Professor Peter Grabosky.

Dr Russell Brewer is a Senior Lecturer and Teaching Program Director for Criminology at Flinders University. He completed his PhD under Peter Grabosky’s supervision at the Australian National University. His research interests include cybercrime, crime prevention, policing and social networks. He has published his findings through several leading publication outlets, holds multiple nationally competitive grants, and has been called upon by Government Agencies both domestically and abroad to advise on policy.