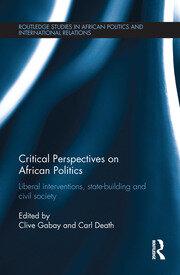 Strong states and strong civil societies are now increasingly hailed as the twin drivers of a ‘rising Africa’. Current attempts to support growth and democracy are part of a longer history of promoting projects of disciplinary, regulatory and liberal rule and values beyond ‘the West’. Yet this is not simply Western domination of a passive continent. Such an interpretation misses out on the complexities and nuances of the politics of state-building and civil society promotion, and the central role of African agency.

Drawing upon critical theory, including postcolonial and governmentality approaches, this book interrogates international practices of state-building and civil society support in Africa. It seeks to develop a theoretically informed critical approach to discourses and interventions such as those associated with broadly ‘Western’ initiatives in Africa. In doing so, the book highlights the power relations, inequalities, coercion and violence that are deeply implicated within contemporary international interventions on the African continent. Providing a range of empirical cases and theoretical approaches, the chapters are united by their critical treatment of political dynamics in Africa.

This book will be of interest to students and scholars of African politics, development studies, postcolonial theory, International Relations, international political economy and peacekeeping/making.

Part I: The liberal project in Africa

Part III: Resistance and the everyday

is Senior Lecturer in International Politics at Queen Mary University of London, UK.

Carl Death is Senior Lecturer in International Political Economy at the University of Manchester, UK.

This fine, expertly edited volume of essays offers a roundly critical, profoundly thoughtful take on contemporary African politics – and on the political science that studies it. Careful to tack between the maniacal Afro-optimism and the dire Afro-pessimism that persists in reducing African Studies to caricature, it takes as its touchstone the Foucauldian concept of governmentality, whose productivity and limits are fruitfully interrogated and put to work anew. Anyone seriously interested in African government and politics would do well to read Critical Perspectives on African Politics.

This edited collection is an important and exciting contribution to critical scholarship on African politics. Inspired extensively, but not exclusively, by Foucault’s notion of governmentality, the book provides rich and empirically grounded illustrations of the often contradictory effects of liberal interventions to build states and create civil societies. In doing so, it demonstrates the coexistence and interaction of coercive and productive power, and underscores the urgent need to analyse African politics as part of broader transformations in global governance.

is a significant and innovative volume that interrogates the international practices of state- and civil society-building programmes in Africa. It is vital to understanding not only the politics of international development, security and democracy promotion in African context but also the complexities and nuances of African states, political elites, economic classes, citizens and popular movements from the lens of postcolonial and governmentality studies. Clive Gabay and Carl Death have assembled a provocative and politically original collection that skilfully draws upon critical thought to question common liberal views of the broad project of reform that Western states and agencies engage in to ‘engineer’ civil society in African states. As such, this impressive collection provides new perspectives for understanding and explaining relations of power, inequality, injustice, conflict, coercion and violence that are embedded within international, liberal interventions on the African continent. The contributors’ astute theoretical, case-study and empirical analyses make this an invaluable resource to students and scholars interested in ‘African politics’, development and governmentality studies, international relations and international political economy.

Often, assessments of liberal interventionism focus on the impact of external actors on local political processes, where the effects of such engagement are juxtaposed negatively with the potential of positive local practices. This is not one of those assessments, in the sense that Clive Gabay and Carl Death, and indeed the contributors to this edited book, have committed to and been successful in highlighting African agency in these stories of how liberalism is used by African state and non-state actors. What Gabay and Death do with this collection is provide a space to start ‘speaking’ and thinking about Africa differently, in a way that considers the lived experiences of Africans—in all their messiness. This book is a must-read for anyone interested in Africa.