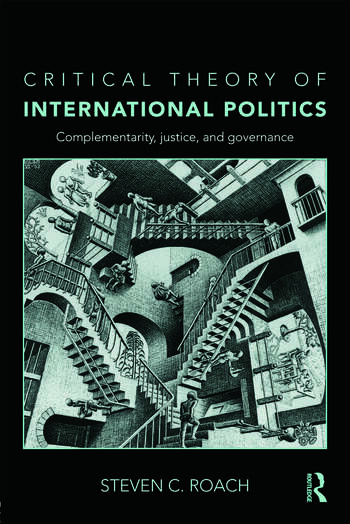 In adopting three critical perspectives on complementarity to analyze the evolving social and political contexts of global justice, this book provides an essential resource for undergraduate and graduate students and scholars interested in the application of critical theory to international relations.

Can critical theorizing in IR be constructive, normative and relevant to global governance? The concept of complementarity, skilfully developed and impressively deployed in this path-breaking book, might just be the key.

Steven Roach's study offers an original interpretation of the philosophical and practical ideas that make up this most nebulous group of scholars known as the critical tradition in International Relations scholarship. Knowledgeable, sympathetic and yet critical, this is an important contribution to International Relations theory.

This comprehensive history of critical theory considers Kant, Hegel and Marx along with Nietzsche and Freud, Western Marxism, Habermas and the Frankfurt School, and more recent developments such as critical realism and ‘world risk society’. By analyzing recent developments in international criminal law, Roach shows how core philosophical dimensions of critical theory are linked with a practical engagement with the challenges of global governance. This is an important study of how international politics have been discussed from a variety of critical standpoints.

A highly commendable effort to answer the challenges laid at the door of critical theory....recapping critical theory's development and subsequent fault lines, and attempting to then make it purposefully enmesh with policy-relevant world politics in a remarkably concise, highly detailed, and authoritative fashion. What Roach has produced will now serve at least two purposes. Firstly, it can be waived aloft by critical scholars and students alike as tangible evidence of what critical theory can do in and for IR, and it can also hopefully sustain debate for at least the next decade.Globalizations, P.A. Hayman, The Open University, UK

This interesting book addresses whether today's global institutions can be understood according to principles of critical theory, with a particular focus on the International Criminal Court (ICC). These are areas on which the author has written extensively... A clear and precise introduction to some of the approaches to critical theory...helps us to understand the ICC...and challenges both reified structuralist accounts and voluntaristic notions of agency while explaining the complexity and contradictions of actual practices."

"Steven Roach gives a thorough summary of the contributions of theorists such as Kant, Hegel, Marx, Nietzsche, Freud, Gramsci, and Weber. Roach approaches these theorists from an international perspective ....which gives his analysis an original perspective sometimes lacking in the discpline of International Relations ...Roach's book is accomplished, widely applicable and an invaluable source of knowledge."Political Studies Review, Edmund Arghand, London School of Economics, UK.

The book provides a rich analysis of critical international relations (IR) theory in relation to transnational justice…The innovative solution offered by Roach is (re-)directing critical theory to include the meaning of complementarity… I laud the author for identifying the concrete requirements for immanent complementarity… Roach’s reinterpretation of critical IR theory is a serious and fruitful scholarly endeavor. The book represents an important attempt at systematizing critical theory and making it policy-relevant.

"Roach prepares the stage for further critical reflection on the legitimizing practices that shape (and are shaped by) the ever-widening marketplaces of global governance."