Crossing the Atlantic
Comparing the European Union and Canada 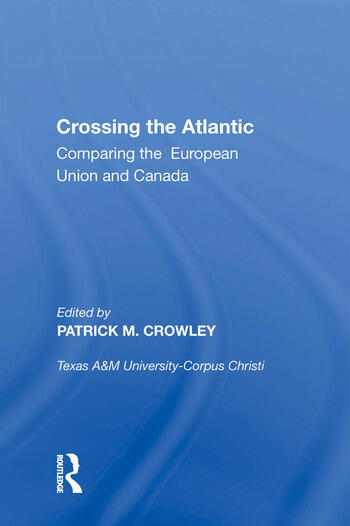 Crossing the Atlantic: Comparing the European Union and Canada

Given the legal, political, economic and social similarities that exist, comparisons between the European Union (EU) and Canada can prove instructive. This volume introduces the rationale for comparing Canada and the EU and reviews the political initiatives that have been undertaken to forge links between the two. Taking the political and economic structure used by the EU, it compares this structure to the Canadian model, at both the federal/supranational level and the local government level. Using various disciplinary approaches and case studies, specific policy areas are used to illustrate these comparisons, and several of the papers in the collection extend these comparisons to the NAFTA level. A highly useful reference tool, Crossing the Atlantic will intrigue and inform an interdisciplinary and inter-regional studies audience.

Contents: Apples and oranges: the habilitation of continental comparitivism, Patrick M. Crowley. The EU-Canada Nexus: Why compare Canada and the European Union - and how?, John Erik Fossum; Toward a Canada - EU partnership?, Donald Barry. Governing the EU: What Can the EU Learn from Canada?: Governing the EMU democratically: some lessons from neofunctionalism and fiscal federalism, Amy Verdun; Intergovernmental relations in the European Union and Canada: the place of local government, John B. Sutcliffe. Policies in an Intergovernmental Context: What Can Canada and NAFTA Learn from the EU?: Comparing the EU and NAFTA environmental policies: comparative institutional analysis and case studies, Joseph F. Jozwiak, Jr. and Patrick M. Crowley; The uses and abuses of the Euro in the Canadian currency debate, Paul Bowles, Osvaldo Croci and Brian K. MacLean; Possible arrangements for exchange rates in a modified, extended or replaced NAFTA, Patrick M. Crowley and J. C. Robin Rowley. Policies for Nation Building: National identity: European Union and Canadian policies in comparative perspective, Edelgard Mahant; The politics of inclusion and exclusion: immigration and citizenship issues in the three democracies, Genevieve Bouchard and William Chandler; Index.